Why did it take so long for the American mainstream to embrace tattoos?

Home » Why did it take so long for the American mainstream to embrace tattoos?

Tattooing has been practiced by various cultures for at least 8000 years.  From New Zealand’s Maori, to Siberia’s Pazyryk nomads, little has changed in the very natural desire to modify the human body.

So why did it take so long for this ancient medium to be accepted by mainstream North American culture?

Initially subject to social stigma, the American roots of tattooing began underground in sailor and criminal counterculture. Back then, tattooing was illegal and appointments were unheard of, pressuring tattooers to become time-efficient. Ready-made flash designs were the norm and tattoos were collected like stamps. Each piece was a symbol of the nautical miles travelled, countries visited on or the battles fought in. Much like the roots of tattooing in Russian criminal culture, tattoos were earned like badges and became visible marks of status. Their connection with criminality led to their taboo social label, which in reality, just pushed the practice farther to the fringes of society.

Like any other stigmatized subculture, illegalization did nothing to make the subculture smaller, but only made it less safe. It might surprise you to know that tattooing did not become legal in New York until February 1997.  The bill was passed with votes counting 38 to 7; the majority realizing that puncturing two layers of skin with a motorized needle and injecting the dermis with ink is a practice that would probably be better off under health regulation. 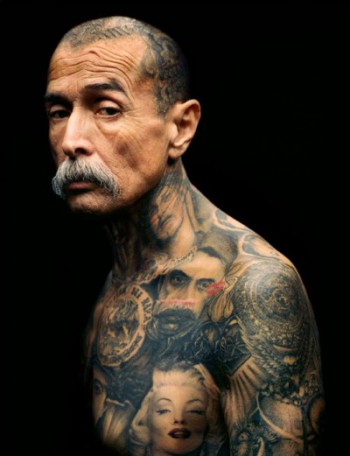 “When I first started getting tattoos, there were definitely undertones of rebellion. I got asked a lot of questions like; how will you be employed? How will you get a good girl? What will your grandkids say? What people didn’t understand back then was that tattoos are a reclaiming of self-image and not a lifestyle choice. The markings on your body do not make who you are.”

Matty has been tattooing for over one third of his life, and during his eight years in the industry he has witnessed a change in public perception first hand.

Counterculture and mainstream culture are transactional. No sooner was Elvis a devil to one generation, than he was a sappy teddy bear to the next. This principle is no more apparent then when Matty tattooed the son of a Canadian Court System Judge in the presence of the justice magistrate himself.

Tattoos have now been absorbed by the mainstream, shifting from symbols of status to symbolic representations of self. In modern society, where we are constantly saturated with images, the permanent combination of image and skin only seems like a natural progression. The popularization of tattoos, or the “Revolution” as Matty calls it, has increased the respect and the quality of work within the industry.

The innovation of custom tattoos has allowed tattooers to push the limits of the needle—large works like sleeves and torso pieces expanding creative license and customized pieces allowing tattooers to truly be appreciated as artists. Not only has customization expanded potential for artistry, it has expanded the appeal of tattoos transcending every social category. Custom tattoos satisfy the natural human desire for a customized identity.

For myself, the choice to get a tattoo came from the desire to choose a permanent feature on a body that I did not choose to occupy. In time, every person will suffer wrinkles and scars. Some will suffer disease, some obesity and some will lose their hair. All of us will lose our youth. Tattoos are a way to exert permanent control over a body that forever changes its costume.

Matty says “I feel like our bodies are the only things in this universe that we own in our lifetime. Everything can be taken away: Our loved ones, our money, and our dreams. Having a tattoo is taking true ownership.”

As the mainstream culture continues to absorb the medium, with tattoos being embraced by pop stars and athletes, there is a new problem that the industry must weather. There is an inherent threat of commercialization associated with popularity. Also born of counterculture, Hip Hop is a prime example of an art form twisted by the influence of commerce. Beginning as the voice of the streets through poetry in rhythm , the mainstream Hip Hop of today has more in common with the materialism of Wall Street than the struggles of Compton. The question is, with popularization will one see an equal rise in the number of suburban white girl cursive quote tattoos?

With the overbearing influence of Reality TV and tattooers, like Kat Von D, now reaching celebrity status, a second hardship likely to face the industry; increased competition due to over-saturation.

There is a constant transaction between both counterculture and mainstream culture, just as there is a transaction between artistic integrity and popularity. One can be assured that what is cool today, will not be cool tomorrow, but can also be equally assured that true tattoo enthusiasts are not concerned with coolness. Let’s face it, the look of aging ink later in life is a pretty flimsy argument against going under the needle. I can guarantee my black blobs will look no more off-putting than your brown age spots.

Tattoos are the ultimate form of self-commitment and it’s that permanency that makes them such a powerful form of self-expression.  As Matty puts it, “Tattoos are marriage without the possibility of divorce.”