The Russian Criminal Tattoo Archive is hosted by: FUEL

There is a reason that Russian tattoos are the most feared and respected thing in prison society. Far from being merely personal, they carry a burden of meaning that is used as a highly coded form of communication to tell a story of each inmate’s corrupted past.

A sharpened guitar string is attached to an adapted electric shaver, while scorched rubber is mixed with a convict’s own urine to create the tattoo pigment. Since tattooing is forbidden by prison authorities, the practice has been forced into the unsanitary conditions of the underground.

Russian tattoos can be thought of like a military decoration, they can only be awarded after a crime has been committed. For instance, a tattoo of a dagger through the neck symbolizes that a convict has murdered someone while in prison and is now a hitman available for hire. So if you see that guy roaming the prison showers, whatever you do, don’t look in his fucking eyes.

The more tattoos a convict has, the more sentences he has served, and the more respect you better goddamn give him. A face tattoo shows that the bearer doesn’t expect to live out his sentence, and usually involves a tattoo with the phrase “Don’t wake me up” on the eyelids. The process of getting this is a torment in itself as it requires a metal spoon to be inserted under the eyelid so the tattoo needle won’t pierce the eyeball.

When a new prisoner enters a cell he is immediately asked “Do you stand by your tattoos?” If there is even a flicker of hesitation, word will be passed around to other convicts that a counterfeit criminal is wearing a false tattoo. Faced with the choice between removing it or a consequence of beating, rape and death, he will be given a brick or an old razor blade and told to remove it.

Tattoos can also be used to stigmatize, and punish individuals in the criminal society who have failed to pay debts, broken the criminal code, or convicted of child rape (which is heavily disappproved of by other criminals). Often sexually explicit images will be forcibly applied on a snitche’s forehead to both humiliate him and warn others what the rat is capable of.

Tattoos serve as the only rule of law in a society beyond the shackles of conventional law. For a newcomer they can literally be the deciding factor between life or finding yourself on the wrong end of a shank. Photographer Sergei Vasiliev has photographed hundreds of inmates across prison systems that have been added to an impressive collection called The Russian Criminal Tattoo Archive, managed by FUEL design group.

For price and availability of prints that have been signed and numbered, please click here.

This inmate was convicted for drug related crimes. ‘Gott mit uns’: ‘God with us’ was a rallying cry of both the Russian empire and the Third Reich. The Nazi Iron Cross expresses, ‘I don’t care about anybody’. This symbol of aggression and insubordination is often tattooed on the chest as if hung on a chain. The barbed wire on the forehead denotes that the bearer ‘will never be corrected’. © Sergei Vasiliev/FUEL, Russian Criminal Tattoo Archive.

The dagger through the neck shows that the prisoner committed murder while in prison, and that he is available to ‘hire’ for further murders. The bells on the feet indicate that he served his time in full (‘to the bell’), the manacles on the ankles mean that the sentences were over five years. ‘Ring’ tattoos on the fingers show the status of the criminal when the rest of his body is covered. The ‘thieves’ stars’ on the knees carry the symbolic meaning ‘I will not kneel before the police’. © Sergei Vasiliev/FUEL Russian Criminal Tattoo Archive.

These tattoos are in the ‘traditional’ style: a large central tattoo covering the chest and stomach area. The central motif is based on Raphael’s Madonna from the Sistine Chapel. This was a popular thieves’ ‘talisman’, reserved only for the highest ranking areas of the body. © Sergei Vasiliev/FUEL Russian Criminal Tattoo Archive.

The tattoo on the neck reads ‘I don’t need happiness’, beneath the neck ‘I live in sin, I die laughing’. The scar on this criminal’s face is usually forcibly applied as a punishment to any convict who has informed or betrayed his fellow inmates.  © Sergei Vasiliev/FUEL Russian Criminal Tattoo Archive. 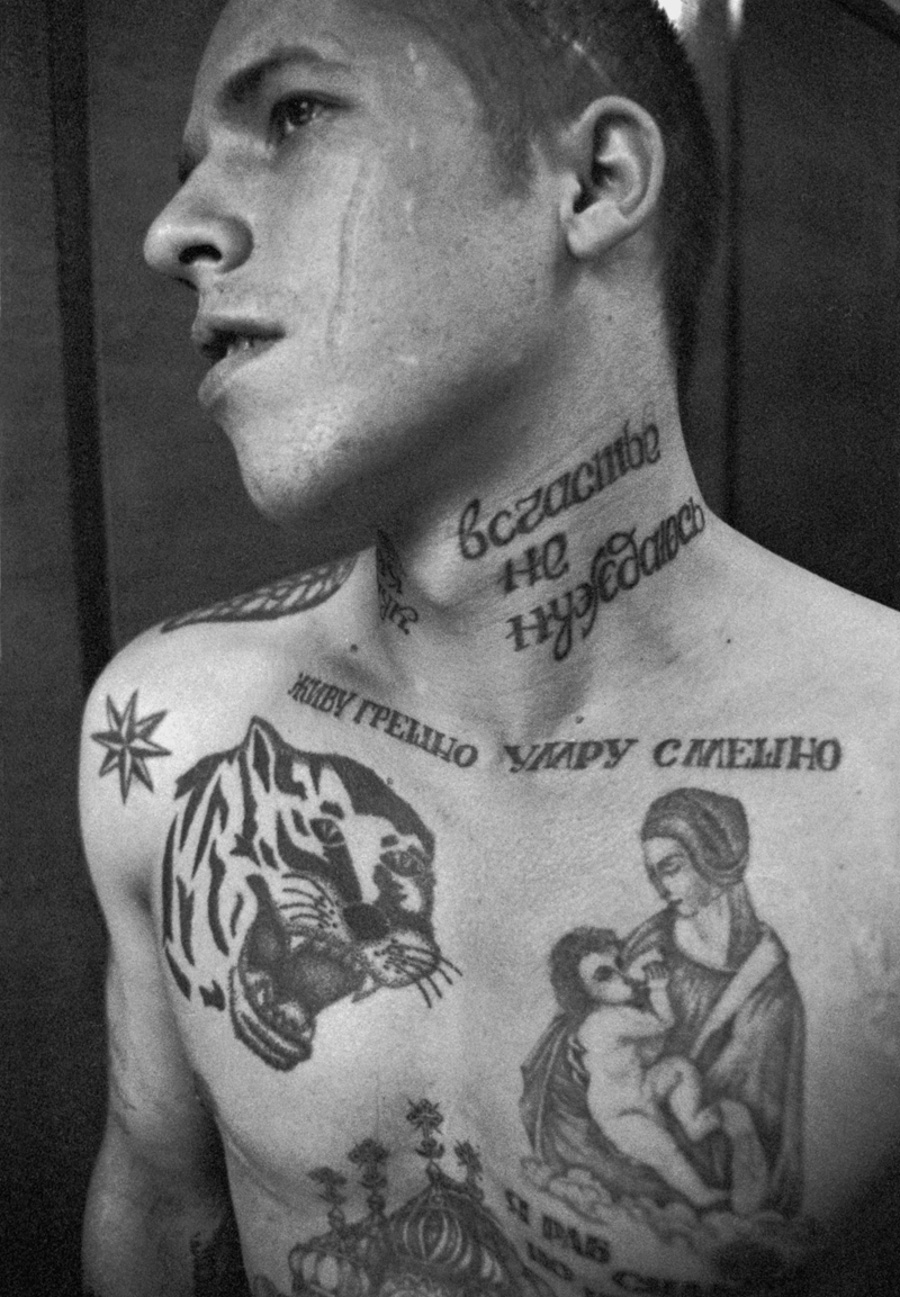 The tattoo on the shoulder of a spider in a cobweb can carry different meanings: if the spider is climbing up the web, the bearer of the tattoo is fully committed to a life of crime; if it is climbing down, the wearer is attempting to break free of their criminal lifestyle. © Sergei Vasiliev/FUEL Russian Criminal Tattoo Archive.

The text around the lock reads: ‘Treasure love, appreciate freedom!’ The symbol on the lock is the mark of soviet quality. © Sergei Vasiliev/FUEL Russian Criminal Tattoo Archive.

German text across the chest reads ‘To each his own’. The SS insignia symbolise agression against the authorities. The Madonna and Child, depicted in the Orthodox tradition of icon painting, means ‘my conscience is clean before my friends’, and ‘I will not betray’. © Sergei Vasiliev/FUEL Russian Criminal Tattoo Archive.

The epaulette tattooed on the shoulder, the thieves’ stars and religious tattoos on the chest all denote this thief’s high rank. The skull in the centre of the epaulette can be deciphered as: ‘I am not and will never be a slave, no one can force me to work’. ‘YK’ indicates the bearer has been through the ‘Intensive Colony’. © Sergei Vasiliev/FUEL Russian Criminal Tattoo Archive.

The text at the top of the thigh reads: ‘The earth is empty without you’. The ‘Made in CCCP’ tattoo on the right breast is the state quality mark of the USSR. This symbol was only applied to consumer goods of the ‘highest quality’. The rose tangled in barbed wire on the shoulder denotes that the bearer celebrated their 16th or 18th birthday in the ‘zone’.  © Sergei Vasiliev/FUEL Russian Criminal Tattoo Archive.

This convict’s apparently random tattoos denote his rank within the criminal world. They embody a thief’s complete ‘service record’, his entire biography, detailing all of his achievements and failures, his promotions and demotions, his ‘secondments’ to jail and his ‘transfers’ to different types of ‘work’. A thief’s tattoos are his ‘passport’, ‘case file’, ‘awards record’, ‘diplomas’ and ‘epitaphs’. In this world a man with no tattoos has no social status whatsoever. Across the chest ‘Death is not vengeance / the dead don’t suffer’. On the arms ‘I live in sin / I die laughing’. © Sergei Vasiliev/FUEL Russian Criminal Tattoo Archive.

A high-ranking, authoritative thief. In the early 1950s, it became customary for thieves to tattoo dots or small crosses on the knuckles, the number of dots indicating the number of terms. The punishment for the slightest attempt to position oneself as a legitimate or to wear an undeserved tattoo was severe. At best, the tattoo would be removed with sandpaper or a razor, but it was not uncommon for the offender to be raped or killed. Convicts were even punished for tattooing more dots on their hands than sentences they had served, or for wearing a ring tattoo with the symbol of a crime they hadn’t committed. German text on the top of his right arm reads ‘God with us’. Latin text on the forearm ‘Remember your mortality’. Text on the fingers of the left hand reads ‘BARS’: (literally ‘lynx, snow leopard’), Bey Aktiv, Rezh Suk (beat up activists, kill bitches); underneath this ‘No Salvation, No Happiness’. © Sergei Vasiliev/FUEL Russian Criminal Tattoo Archive.