In a room full of bright and colourful mats, women stretch out, arching their backs and practicing deep breathing techniques. Among them is Breezy. She stretches and poses with the other women in the room, focusing on relaxation. Only difference—she’s a cat.

Last week Yoga at Connie’s, a yoga studio in Illinois, partnered with the no-kill animal shelter Homeward Bound to bring six cats to the studio to mingle with the students. According to BoredPanda, the cats alternated between watching on the sidelines to taking centre stage and showing off their own moves, with a few belly rubs in between. The cats interact with the students during the sessions, even jumping up and sitting on them during their routine. 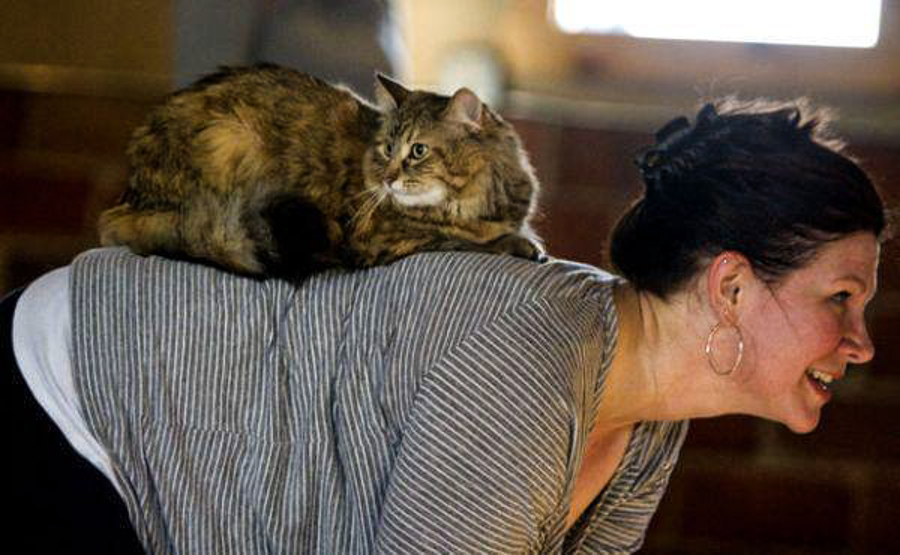 June is Adopt-a-Cat month and Jeanette Skaluba, Homeward Bound social media volunteer, hoped that the event would spur adoptions. The event raised more than $500 for the shelter and one of the cats already has a new home.

Skaluba says the event is important because it gives the cats exposure and shows off their personalities. “By taking the cats to a yoga class, people have the opportunity to interact with them outside the shelter,” writes BoredPanda.

Besides being the perfect yoga buddy, cats carry a range of health benefits. Cat owners have a 40 per cent lower risk of having a heart attack, as well as lower blood pressure. Furthermore, cat purrs have both physical and mental healing affects. Along with lowering stress, cat purrs promote bone strength and help with the healing of muscles, tendons and ligaments due to their vibration frequencies. Plus, they’re pretty darn adorable.