Why most of our world’s food crops are becoming extinct

A disturbing study conducted by the UN Food and Agriculture Organization (FAO) back in 1999 revealed that since the 1900s, 75% of agricultural crops have been lost, spiking a decline in plant variety and putting at risk what FAO defines as ‘agrobiodiversity.’ In turn, farmers worldwide abandoned their fruitful, diverse varieties for the higher yielding crops, creating a more uniform and less diverse agricultural landscape.

In a 2013 interview with BBC, Colin Khoury, a scientist from the Centre for Tropical Agriculture based in Colombia, stated that, “over the past 50 years, we are seeing that diets around the world are changing and becoming more similar—what we call the ‘globalized diet’.”

The global crop variety has steadily decreased in the last century.

Although undoubtedly, many things have changed since these studies were conducted, we can’t say they’ve changed for the better. If anything, the situation has gotten more severe with the rise and profit of industrialized agriculture and our monopolized seed supply.

This lack of agrobiodiversity means a lot of worrisome things for our food supply. Although high-yielding crops are undoubtedly helping tackle the global hunger problem, they are also energy-dense with low nutrient content, which creates unbalanced diets and a struggle between the quality vs. quantity dichotomy.

Furthermore, this reliance on such a small batch of different crops makes it far too easy to suffer from a food crisis. If crops fail, such as with the increase in wheat disease epidemics attributed to global warming, the majority of the food system will also be down. For this reason, in February 2014, the European Parliament asked for the European nations to find ways to preserve the biological and genetic diversity of crops, so that “plant breeders [can] provide adaptable varieties able to cope with the projected climatic changes and the need to increase yields.” 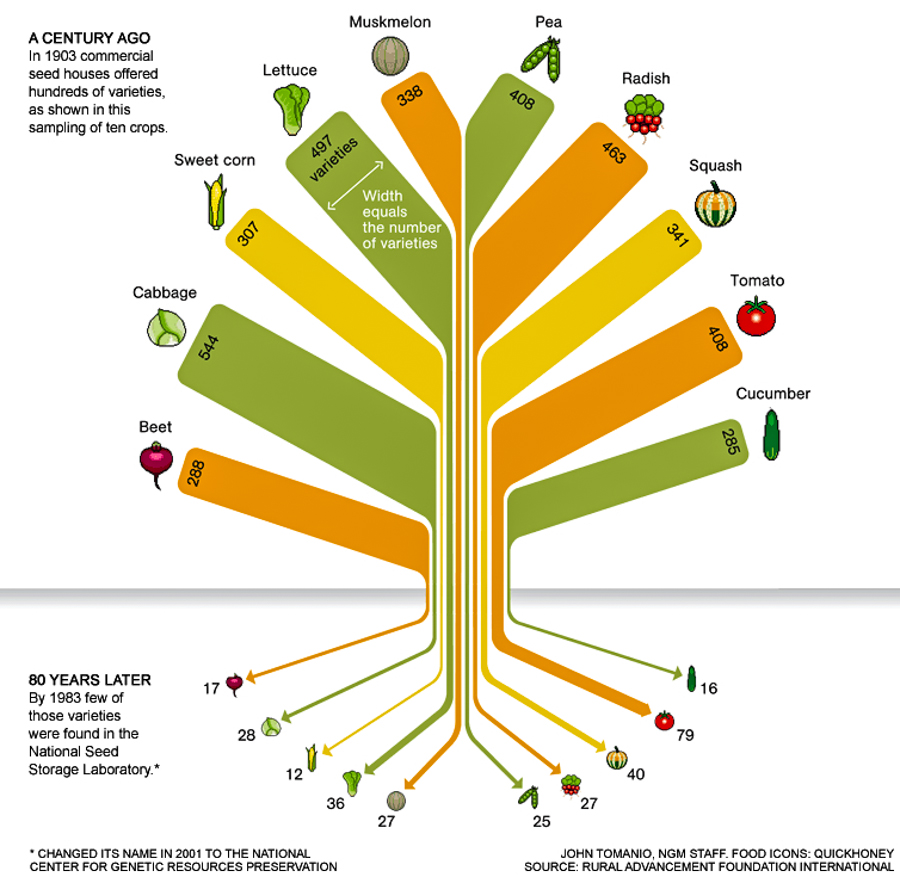 In fact, the FAO also predicted that our current crop diversity, which is not very diverse at all, could actually disappear within the next 35 years if we keep doing things the way we are.

There are multiple factors which have contributed to the decline in agrobiodiversity, some of which are outlined in the FAO document previously talked about. These include:

1. “The rapid expansion of industrial and Green Revolution agriculture,” for example, the use of GMOs and the fact that not many food varieties are still cultivated in monocultures.

2. “Globalization of the food system and marketing.” This includes the industrial patenting of living organisms, something Monsanto is famously culpable of doing. This has led to a monopoly guilty of creating widespread uniform cultivations of the same thing, leading to a less diverse but more competitive global market. For obvious financial reasons, this means farmers are forcibly discouraged from cultivating anything that isn’t in high demand, leaving agrobiodiversity on a back burner.

However, FAO stands by their statement that the major reason for the decrease in agrobiodiversity is “the replacement of local varieties with improved or exotic varieties and species,” namely the introduction of GMOs into the agricultural landscape. The introduction of genetically modified varieties causes something known as ‘genetic erosion’, a phenomena where the gene complexes found in the original crop varieties aren’t found in the genetic, modern species, exhausting the reproductive gene pool.

To solve the problem of crop extinction, seeds must be preserved for future generations in seed banks like The Svalbard Global Seed Vault

In traditional agriculture, farmers would save and trade seeds freely with each other, promoting biodiversity. However, most seed production is now controlled by a few companies and most of these seeds are genetically modified.

Now, farmers can no longer share seeds because of strong, unfair patents and Monsanto’s tendency to make their seeds ‘self-destruct’ after one cultivating period.

Thankfully, it’s not all bad news.

Seeds, an episode of The Lexicon of Sustainability sponsored by PBS Food talks about The Apples of New York, a book discovered in 1905 which featured hundreds of different varieties of apples that people had never seen before. These apples were some of the victims of selective agriculture and are now completely out of the mainstream food supply. If you want to try one of these, you can now visit a preservation orchard like Big Horse Creek Farms in North Carolina or David Snyder’s Chicago Rarities Orchard Project (CROP), which are dedicated to preserving rare types of apples in an attempt to prevent an all-together extinction.

To feed growing populations the world needs diverse crop varieties, yet national seed collections are often lost due to mismanagement. This is the LIT tunnel of the Svalbard Global Seed Vault.

Environmental activist and anti-globalization author, Vandana Shiva, is also on a mission to save seeds. She believes in implementing seed sovereignty, defined as “the farmer’s rights to breed and exchange diverse, open source seeds which can be saved, which are not patented, genetically modified, owned, or controlled by emerging seed giants”—a very important concept that has the power to terminate the gross seed monopoly we’re currently living in.

Now, we see the rise in a global movement dedicated to preserving and sharing seeds. This is happening through storing of seeds in seed banks, gathering at seed swaps and sharing both seeds and the knowledge needed to cultivate at-risk crops and rebuild communities.

The vault has more than 740,000 seed samples, making it the most extensive collection of crop diversity in the world.

Seeds of Diversity is a Canadian non-profit dedicated to “search out, preserve, perpetuate, study, and encourage the cultivation of heirloom and endangered varieties of food crops,” and they’re not taking the task lightly. By encouraging gardeners and farmers to attend seed swaps, working with groups and institutions across the globe, and encouraging commercial seed companies to grow and distribute endangered varieties, they are making real progress in educating the public and seeing at-risk crops begin to thrive again.

Although much work still needs to be done, the first matter of value is public education. Supporting local farmers who work with heirloom varieties and being aware of the consequences brought forth by buying from agribusinesses is important. Buying cheap is not always the most important thing, especially if it comes with hidden risks like the ultimate demise of agriculture and a future of corn and rice dinners seven nights a week.