Somewhere in the windswept valley of Patagonia, Emily sits cross-legged next to her blue Westfalia at the foot of a glacial-blue lake looking up at a series of snow-capped mountains, huddled behind the trees. She holds her newborn, Sierra, in her arms to make the most of the region’s scarce warmth. Her husband, Adam, organizes the harnesses, rope and belay-system with their first-born daughter, Colette, to prepare for a day on the rocks. “When Patagonia gives you warm earth, you sit on it,” reads a caption on the family Instagram page, the primary outlet for neo-beat life, trading notebooks for cellphones and using DSLR cameras to convert their many experiences into a living story, unravelling itself across the Internet, day by day. 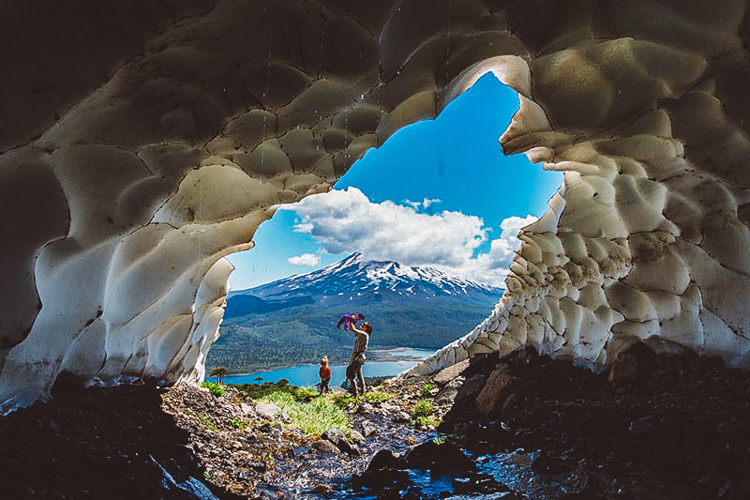 Countless travellers and creatives have taken to the internet with hopes of converting their nomadic lifestyle into a career of permanent exploration and, ultimately, blogging. California natives Adam and Emily Harteau, along with their two daughters Colette and Sierra, represent an incredibly important arm of the travel-blogger sphere that gives hope to young families and older-generation vagabonds that road-life isn’t exclusive to non-parents or reckless 20-somethings.

In 2012, Emily and Adam planned a road-trip southbound to Tierra del Fuego, the lower tip of South America, when their firstborn, Colette, was only 21-months old. The original idea was to make it a year-long round-trip, but four months in they realized that the mammoth intercontinental stretch between L.A. and Tierra del Fuego was too substantial to insult with chiefly out-the-windshield views. They needed more time, so they began to redraw the blueprints for a permanent journey.

Emily and Adam, like many full-time travellers, rigged up an old Volkswagen Westfalia to live out of, innovating travel-sized versions of the traditional amenities, including a stove, sink, fold-out bench seat that doubles as a bed, a pop-up camper, fridge, closets and an awning that serves as the roof for their mobile patio. “With no toilet or shower, we water trees frequently, use a plastic tub as Coco’s portable pool and a Swiss Army solar shower to keep ourselves fresh,” admits Emily on their website. Adam prefers taking ocean showers in the breaking surf, storing enough surfboards for the whole family on the top of their van. Tight budgeting is crucial to keeping the van-life in motion, so they do their best to camp for free in remote areas.

The family’s ambition has attracted the attention of over 80,000 Instagram followers and countless blog faithfuls, hooking big-city dwellers and corporate zombies with the promise of freedom. Most remain distant spectators, living vicariously through the courage of bloggers like Emily and Adam to cut their anchors and float into the unknown. Though onlookers generally concern themselves with the how, the ones who make the leap stay loyal to the mantra of why, understanding that practice follows purpose and that the method is ongoing. Supporting travel requires constant innovation—Emily and Adam’s journey is ushered forward by a slew of brand-sponsored content, selling art, and organizing branded pop-up shops called “The 24-hour Bazaar” to sell fair-trade and locally-made products. To get a head-start, Emily and Adam launched a Kickstarter campaign before leaving California to fund their first trip spanning 20 countries and 23,000 miles through South America. The intention was to use the trip as inspiration for an art project conducted by Adam, where he could take photography and compose a series of original collages based on the experience. The campaign grossed over $16,000. To give their bank accounts a facelift, the couple also held a series of yard-sales to pawn off any unnecessary goods they had hiding away in their attic. Evidently, if you want to live the dream, you’ve gotta hustle. 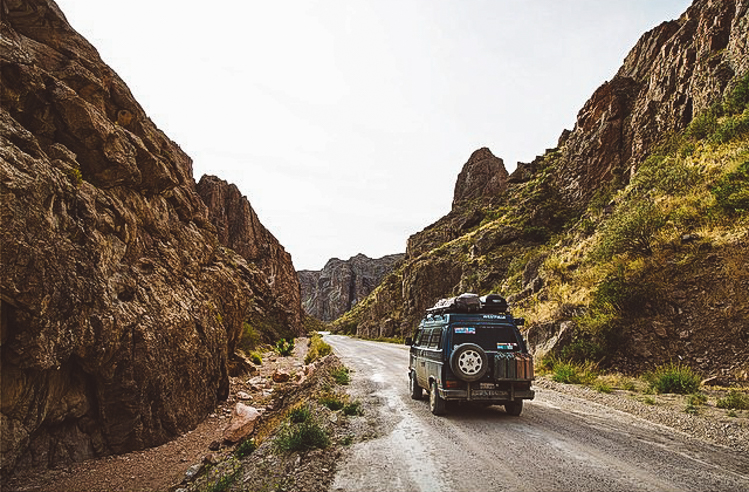 According to The New York Times, neither Emily or Adam are strangers to the lifestyle of nomadic spontaneity and empty wallets. Adam spent his childhood living out of a renovated school bus and off-grid cabin with his hippy parents; his dad sought work as travelling carpenter. Emily spent her summers travelling the country with her parents in a Caravan. Is a van really the place to raise a child? I suppose that depends on the values you wish to pass forth. Anyone who has seriously travelled will contend that there is no book, school or person that can provide you with the rich understanding of the world that comes from genuine exploration. New experiences are the foundation of education. When you wake up in a new place every day, your understanding of the world is constantly expanding and your skill-set is crafted by the necessity to evolve. As Adam puts it, “Our journey is the summation of things we wish to show and teach Colette: simple living. Richness of experience. Love above all. Togetherness. Respect for others and the planet.”

For those of us who sit behind a desk day after day, scrolling through pictures and blog posts from families like the Harteau’s with envious eyes, wondering what the hell happened, perhaps we missed the turnoff of a road less travelled. Humans are creatures of habit. If you grow your family in a stationary home, and send your kids to sit behind a desk, year after year, confined by the same four walls to study a curriculum passed down through generations of white-collar daydreamers, then you may be giving them a 20-year treasure map leading to a cubicle.