As a child, Jim Dutcher had a fascination with nature—particularly the backcountry of the mountains and the animals that lived within them. Once, while exploring the woods, he encountered a curious grey wolf for the first time. It seemed unafraid and almost approachable—an image that stuck with him for years afterward.

Fast track 30 years and Jim is a documentary filmmaker looking for new ideas. While out for a walk in the same woods of his childhood, Jim witnessed another wolf that seemed as calm and unthreatening as the one before. Suddenly, he began to wonder if wolves really were the bloodthirsty killers that people took them for, and decided to immerse himself into the Sawtooth Wilderness of Idaho.

Joined by his wife Jamie Dutcher, a zoologist he had met on a flight back from Africa years prior, the duo set up camp in the wilderness with the hopes of getting a profound look into the lives of grey wolves. Their main goal and strongest mutual interest became to debunk the myths that had put these animals on the brink of extinction.

Wolves are incredibly wary of humans, which means very little about their lives has actually been filmed. However, many people don’t understand this and by 1990, only about 50 wild wolves remained in all of the American west. An estimated two million had been killed in order to protect livestock, and the surviving wolves spent their lives fearfully avoiding humans. Even spotting wolves from above had become increasingly difficult, meaning that in order to pull off their documentary, a new strategy had to be forged.

Jim secured a permit on a stretch of land below Idaho’s Sawtooth Mountains and, along with a team, constructed a 25 acre enclosure. This enclosure was the biggest in the world at the time—large enough to give the animals a sense of freedom but also a size that would be manageable to monitor.

The root of this project lied in creating a wolf pack from scratch—something that had never been done before. The entire project banked on the animals developing a sense of camaraderie and establishing their own hierarchy. Jim brought over an adult male from a research camp, then a female and a handful of wolf cubs, releasing the latter into the forest at 12 weeks of age. As time went on, the duo began noticing that relationships were starting to form. This was the beginning of what Jim and Jamie referred to as the Sawtooth Pack. It was also the first time wolves had inhabited the area in over fifty years.

The Sawtooth Pack became well observed by Jim and Jamie from 1990 until 1996. They put together a documentary film, Living With Wolves, which shows the intimate connection that grew between the human and wolf members of the makeshift community, along with never-before-seen footage of wild animal interactions. Living With Wolves became applauded by naturalists, conservationists, filmmakers and scientists- although not completely free of criticism. After all, many argued that the Dutchers created these relationships artificially.

But natural or not, as the film narrates, this experiment became a display of how grey wolves are “devoted to one another, capable of affection and bonds resembling those of human families.”

A lot of footage is dedicated to showing the bond that Jim and Jamie had with these animals. Clips of the wolves running up to them and licking their faces are paired alongside a shot of Jamie receiving permission from one of the wolves to crawl into the den where a litter of newborn cubs was resting. It shows a real form of respect and trust which unfolded between two very different species long regarded as enemies.

“Jim’s goal was to listen to the wolves, not as a scientist but as a social partner,” states Jamie as she gathers photos, images, and sound recordings of the pack playing in the forest. And the wolves reproducing was a sign that the experiment, and his treatment of the animals, had been a success.

“Our hope is that the fear of wolves is fading. That people are beginning to know them as caring animals devoted to their families—animals that deserve a chance to survive. We believe the wolves of the Sawtooth Pack were the forerunners of their wild cousins, opening people’s eyes, serving as ambassadors from their kind to ours.” 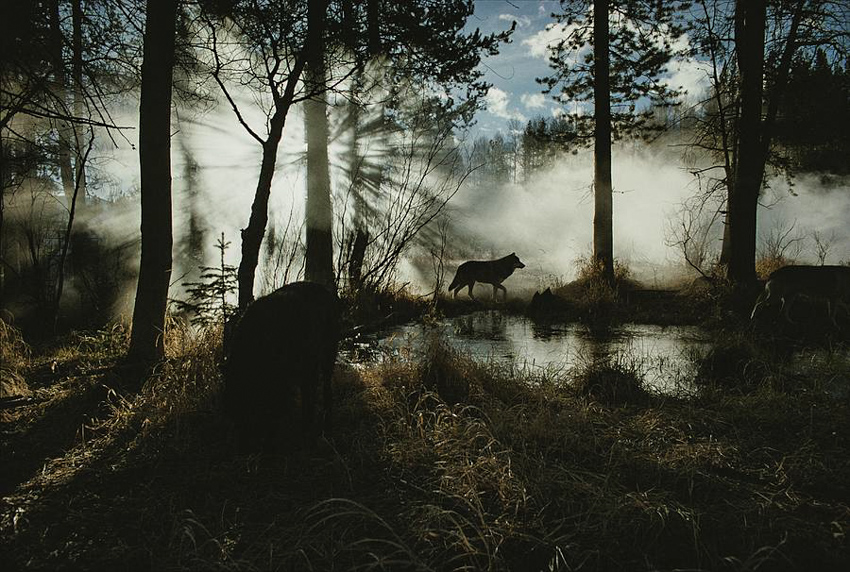