After a “slump” in London, Ontario’s music scene, local Preston Ell has morphed his own house into Satan’s Cove, the city’s smallest all-ages venue.

Inspired by the Do-It-Yourself (DIY) movement, Ell’s bungalow – home to three others – doesn’t have the flash of other venues; its burgundy bricks and shut curtains help it blend in with nearby homes. But by listening closely, rumbling can be heard from the basement: music resounds in the belly of Satan’s Cove.

The downstairs is a long aisle only quarter-lit. The low ceiling is scathed with boot polish while duct tape and scribbled drawings cover holes in the drywall. Mud and beer is smeared on the white floor, noticeable even under the dim lighting.

“We called this place The Shire because most average-height people hit their head off something,” says Preston Ell, the shows’ primary booker. 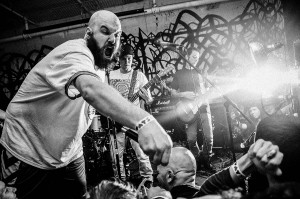 During sets, Ell often stands in the back, casually peering over a mob of black tee shirts and patched denim. In the crowd, punks head-bang and thrash their bodies against each other. Lights flicker as desperate arms flail in front of them, grappling onto bodies and teetering speakers for balance. The hot, humid air smells of body odour, forcing many to refuge to the downpour outside. On colder nights, steam lingers around the door as fans flood out.

Ell and his roommates are used to the chaos, hosting over 20 concerts since July 2013. Shows at Satan’s Cove are an attempt by Ell and affiliates to revive the city’s starving all-ages hardcore scene. Ell says, “There’s been a lack of small venues and a lot of poor event booking. There would be months of nothing to do.”

From 2008-2012, several of the city’s venues closed their doors for various reasons, from capacity issues to serving minors. The Embassy – the largest venue to shut down – was bought in 2009, eventually being torched in a string of arsons; the lot remains vacant five years later, still a source of smoldering nostalgia for many.

“After the majority of all ages venues closed I lost quite a bit of faith in the London music scene,” says Kam Kellestine, a London musician. “The opportunity for younger fans to experience shows was almost non-existent and the majority of bills left no opening for young musicians.” 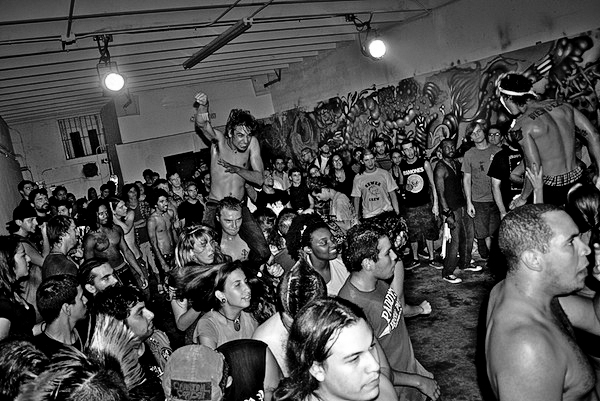 Since many young, local acts can’t fill traditional venues, London promoters are hesitant to book them for financial reasons. This leaves a large age gap in the musical community, fuelling frustration in youth who have very few outlets for entertainment and expression—something incredibly important when coming to terms with your own identity.

Other concert halls refuse to book heavy bands. The London Music Box forbade hardcore bands to play their venue in March 2012 after disrespectful show-goers kicked and vandalized venue walls. One local church banned concerts in 2009 after a Toronto band’s smoke-machine triggered a response from the Fire Department.

The DIY movement started in the 1960s, seeking to create an “economy of mutual aid” and encourage the “non-commodification of art.” The movement supports the “impeding” and “subversion” of capitalist institutions. Basically, they were a way to cut out the middle man, and take back control over music in the public domain. 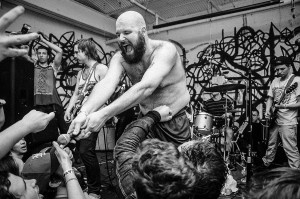 Ell admits traditional venues have perks, including higher capacities and permanency. Unfortunately, some owners and promoters allegedly exploit and exclude young musicians by only hosting 19+ shows or having groups pay to play.

“Most promoters want to merely make a profit to live as anyone else does; within reason, I believe that’s fair until we form a better political structure,” Ell says. “House venues are affected by capitalism because even when we aren’t making profit, we’re still working within its confines to fill gas tanks, feed people on tour, and cover costs associated with having shows.”

Although DIY venues already existed for older London punks, Satan’s Cove – and other venues catering to young musicians – are important to the all-ages scene. Clara Gomes, who plays in an underage metal group, says the dependency on DIY is out of necessity.

“I’m not 19 yet, so there are many shows that I’ve missed out on, but with DIY venues everyone is always welcome,” says Gomes. “Underage kids rely heavily on these shows because they have nowhere else to go.”

Hosts of DIY venues have also had problems with vandalism says Mack Colvin, a local scene-supporter.

Colvin held garage shows in 2012 until he was fined for noise complaints, but was often left cleaning litter and garbage off of his front lawn.

Despite these incidents, Ell says holding shows are worthwhile. He says it’s important to run venues from “grassroots”, DIY causes.

“I prefer venues that are run ethically where they treat attendees with respect,” Ell says. “House venues are the best example of this.”

This dependency on DIY spaces has caused an increase in these venues, Satan’s Cove arguably the most successful. The venue’s biggest events were during London’s Radish Fest, a summer weekend festival drawing hundreds to two DIY venues. The fest’s highlight was its final night, a concert that abruptly ended after the audience broke a basement water pipe.

“We’re all going to get electrocuted,” the band’s vocalist screamed, gawking at a crowd member trying to plug the pipe with his shirt. Volunteers bailed water out of the house while others carried instruments back to Satan’s Cove to finish the show.

Ell says these events “display the power of community through the amount of work people put into making these things happen.” However, he believes an ethical, traditional venue could solve the woes of London’s all-ages hardcore scene. 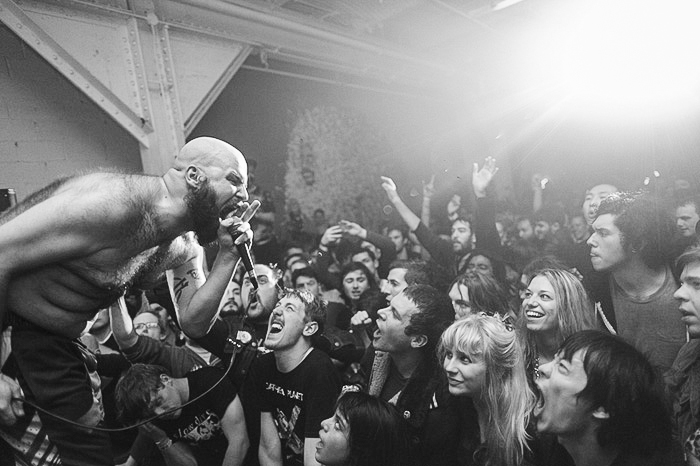 Eedy is attempting to make RumRunners – a London bar – an all-ages center. By fusing London’s young and old hardcore audience, Eedy thinks that the draw will make it easier for promoters to book all-ages events.

“Something needs to happen where they can mix again, on smaller local bills in a venue,” Says Eedy. “It’s what we’re trying to do with RumRunners.”

Ell supports the idea of conjoining the two communities, saying he sees no reason to “limit age” in the punk scene.

But unless circumstances change, Satan’s Cove is acting as a political stand for young musicians on their last legs.

“I don’t know where I’ll be in the next year or the year after or 10 years from now,” Ell says. “I really could be anywhere. I don’t want people to rely on me here, I just want others to just take what they learned here, and apply it to future audiences.”