Imagine waking up paralyzed and trapped in a nightmare: Sleep Paralysis

Imagine coming out of a dream, attempting to awaken and rise from your bed, only to find that you are completely unable to move. Aside from this, you sometimes experience a plethora of colourful hallucinations. You lie there frozen, totally incapable of speaking, surrounded by strange visions and shadowy figures. You begin to wonder whether you are merely caught in a dream, or if what you’re experiencing is a twisted, muddied version of reality.

Bre is a 23-year-old narcoleptic who also suffers from sleep paralysis. Since the age of 12, Bre has been affected by sleep disorders, but it wasn’t until she recently went for a medical diagnosis at a sleep disorder clinic that she fully understood her condition.

“I imagine my experiences feel a lot like ALS or locked-in syndrome. It’s like being in between a dream like state and consciousness. You are trapped within your own body, but your auditory perception is usually intact and you are completely aware of what’s happening. In my experience, the majority of the time you are surrounded by this dark presence,” says Bre.

READ ALSO: Beginner’s Guide To Lucid Dreaming- You Spend One Third Of Your Life Asleep

Sleep paralysis is estimated to affect roughly 7.6% of the adult population at least once in their lives and can happen either upon falling asleep or upon waking. During dreaming, gamma-aminobutyric acid and glycine are released into the brain to prevent humans from reacting to the dream in real life. Sleep paralysis is caused when these chemicals are released too soon or too late in the sleep cycle.

Though many people experience this only once in their lives, some individuals are more prone to repeat occurrences than others.

Bre’s narcolepsy is caused by a lack of hypocretin, the chemical in the brain responsible for the stimulation of wakefulness.

Maurice Ohayon, a Stanford Professor of Psychiatry and Behavioral Sciences, has observed a variety of cases in which many individuals who experience sleep paralysis also suffer from other ailments such as anxiety disorders, migraines, and narcolepsy. Though these connections have been made, there are still occurrences of sleep paralysis in those without any of these behavioral associations.

While genetics has been linked to sleep paralysis, stress, and sleep deprivation, other lifestyle factors have also been said to initiate the condition. 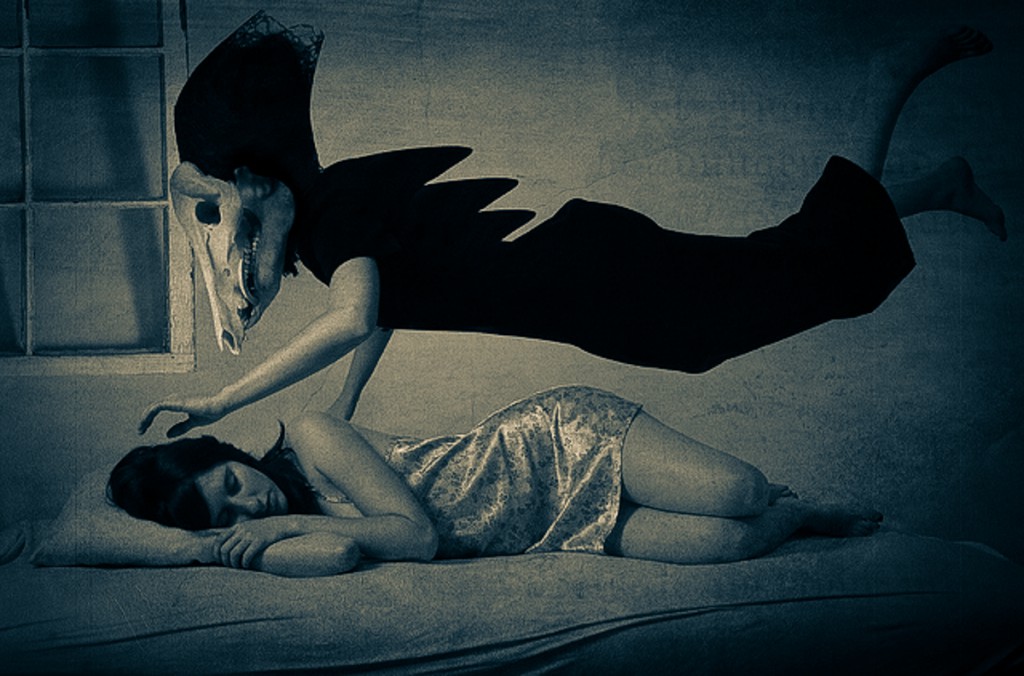 “Sleep paralysis can be a humble out of body experience, but the majority of the time it’s absolutely fucking terrifying, You are trying to scream to get out of your body, but the louder you scream, the more you get stuck inside yourself. It’s like a downwards spiral,” Bre says.

During a particularly horrifying episode of sleep paralysis, Bre experienced a nightmare in which she was gang raped by two men with “bony claw-like fingers.”

“Honestly, this is the closest thing I’ve ever had to a dream feeling like reality. I feel like I was violated by my own mind.”

Despite the fact that the term “sleep paralysis” was coined in the year 1928 by neurologist Kinnier Wilson, the condition has been recognized for quite some time. Sleep paralysis has been traced much further back in history, having been passed down primarily through ancient folklore. In old tales, it was commonly associated with “mare”, and other looming, eerie supernatural forces.

In old Scandinavian tales, sleep paralysis was said to have been aggravated by a mare—an ominous, evil spirit that sat on a dreamer’s chest to initiate visions and nightmares. The resulting nightmares were overwhelmingly draining and unsettling to the victim.

In Fiji, there is yet another supernatural legend associated with this mysterious sleep phenomenon. Sleep paralysis was supposed to reveal that a person had been swallowed up, eaten, and was under the influence of a demon. A similar story exists in Africa, called “Ogun Oru,” which is otherwise known as nocturnal warfare with unseen forces.

To this day, alternative theories and folklore on the subject remain active, but the common themes among them involve demons, incubi, and other supernatural threats.

“I tend to think of myself as a realist. With all the scientific facts to fully understand what’s going on, I don’t know if the tales carry any relevance in modern times. Although, if this was happening to me 200 years ago, I probably would have believed that I was possessed,” says Bre.

Some of us may only experience the cryptic sensation of being frozen once in our lives—while others may never experience it at all. But for the few, like Bre, who experience such moments on a regular basis, the aforementioned state of frozen uncertainty is a clandestine, mystifying part of existence that sometimes begs more questions than it answers.