Will all who come to the United States really enjoy equality and freedom?

Photographer Nicola “Ókin” Frioli tells the untold story of heartbreak and devastation that many migrant families suffer when seeking security and opportunity in the United States. People continue to flood out of Honduras, El Salvador, Guatemala and Nicaragua in desperation to escape the gang violence that riddles Central America.

They must pass through Mexico, where many fall victim to sexual abuse, heavy-handed beatings, kidnappings or worse—at the hands of the countries notorious gangs. Many lose limbs when jumping between the carriages of cargo trains that transport them to the border.

These photos shed light on an issue that has largely remained out of the public eye and remind us of a mutual humanity that transcends all language.

Teofilo Santos Rivera, 42, Panamá. He was the victim of an attempted mass assault by gang members during the crossing through Mexico. He jumped off the roof of the train, hurting his feet. Also suffers from liver cirrhosis and a cancerous sore on the back. In January 2014, the doctor gave him only 40 days to live. His idea is to reach his children and grandchildren in the U.S. to say goodbye. – Tapachula, Chiapas, 2014.

Mariana, 29 years old, Honduras. She was assaulted during her crossing as an undocumented person through Mexico, with the intent to arrive in the United States. She was pushed by the assailants into a ravine, and was able to avoid an attempted rape. Mariana’s travel companion was beaten when she attempted to defend her. She was moved to a hospital in Tenosique, Tabasco, and then three others where they did not perform the necessary operation. Fifteen days had passed (8 days were in a Hospital in Villahermosa, Tabasco) and the operation became urgent. The last doctor that saw her only requested a new splint and a call to immigration. – Tapachula, Chiapas, 2010.

Wheelchair, adapted from a plastic garden seat. It is a work donated by the International Organization – Free Wheelchair Mission – (www.freewheelchair.org) to to the shelter “Jesus el Buen Pastor” in Tapachula. – Tapachula, Chiapas, 2008.

Anonymous with daughters hidden behind the cardboard to protect their identity. The message says “I have worked with drug traffickers (in Honduras) to support my family, until I fled for the safety of my children.” In Central America, one of the few jobs available is drug trafficking. – Tapachula, Mexico, 2014. 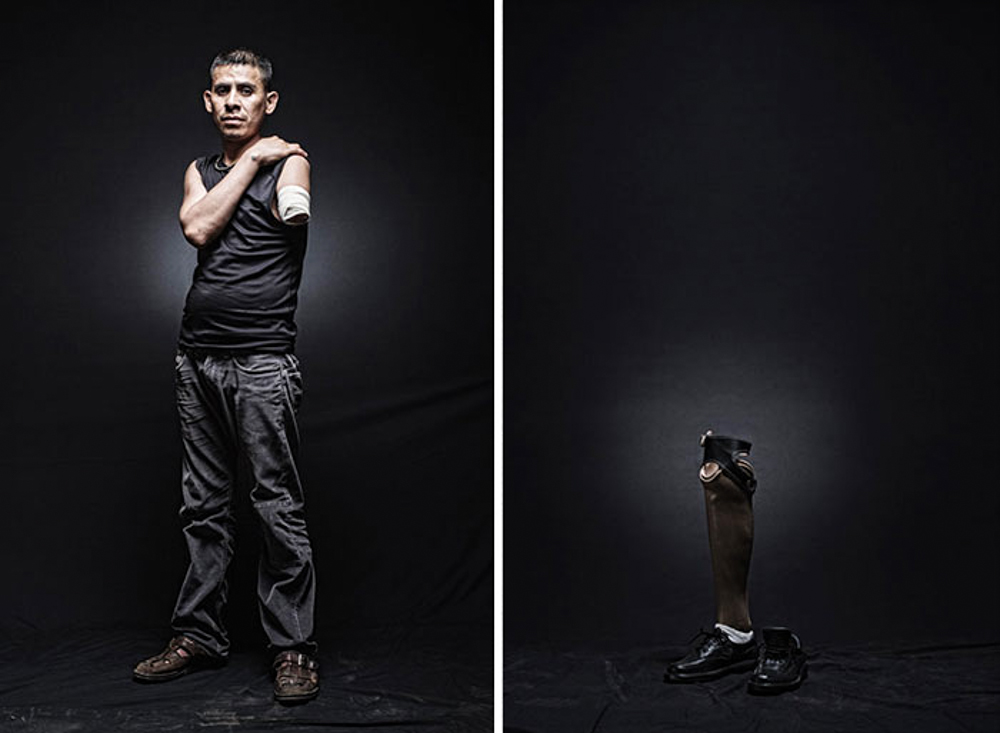 Armando, El Salvador. His destination was the United States, but he was deported in Baja California while riding in the cargo train crossing Mexico. He wanted to retry the trip as undocumented via Tenosique, Tabasco. This time, while trying to get on the train, he fell and the very train amputated his arm. He awaits the document certifying him as a refugee. – Tapachula, Chiapas, 2014. 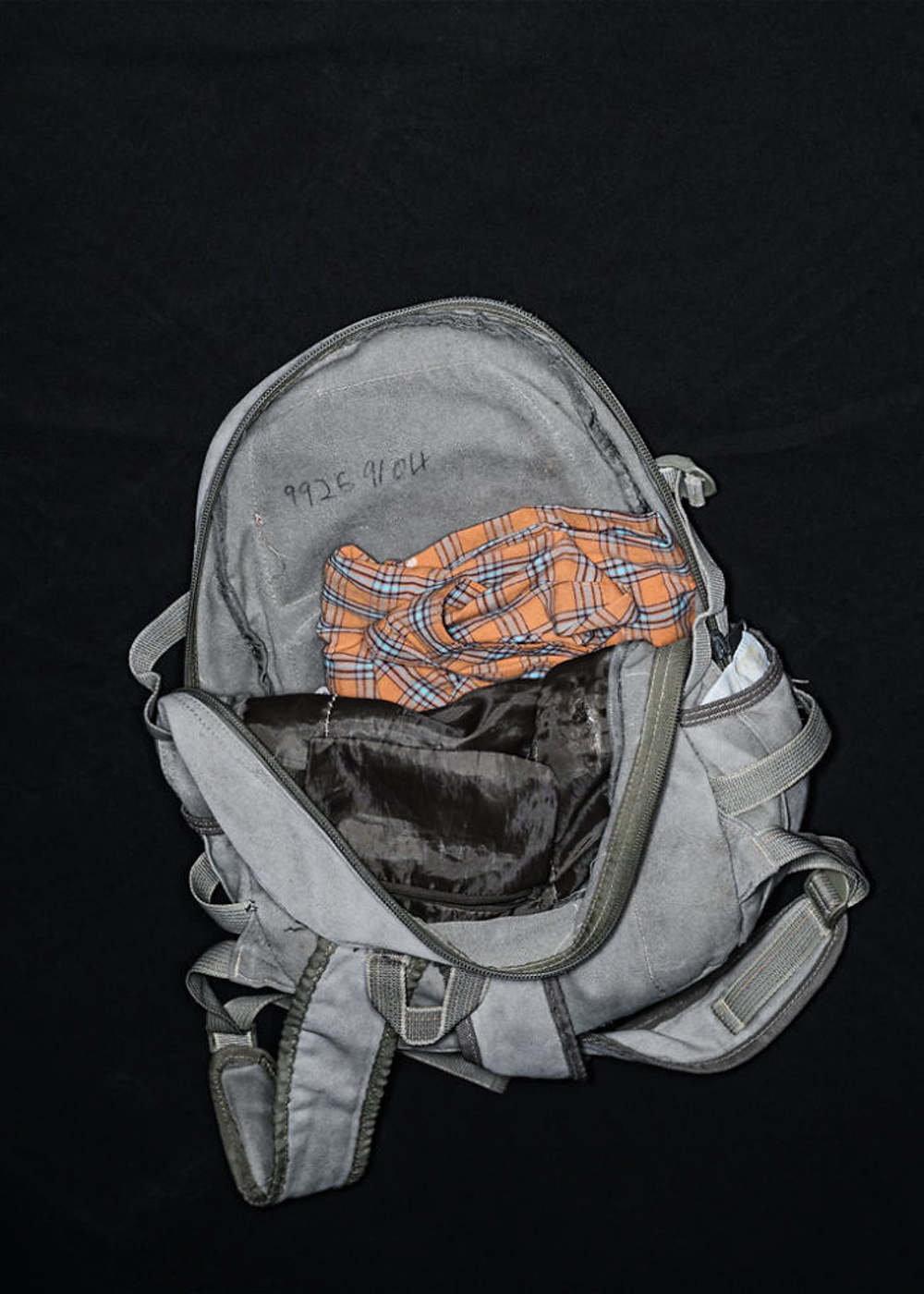 The Backpack of Salvador Santo. Salvador Santo, 21, has written inside the phone number of a relative in Honduras. The need to hide information to prevent abductions and extortion of family while he crosses Mexico. According to the National System of Public Security (SNSP), abductions reported to the Attorney General in 2013 were more than 3,600 cases compared to 1,259 in 2012. – D.F., Mexico, 2014.

The Rosary. It was given to Elsa Santos Mateo (28, Honduras) by her employer in Guatemala to protect her during her journey. -D.F., Mexico, 2014.

Gonzalo, turned 22 during his trip as an undocumented person in Mexico. His family in Honduras hopes that he’ll make it to the U.S. He left a message on this board for his wife and 9 month old daughter: “Lorena, Rafaela, I miss you a lot. Back soon ” – Ixtepec, Oaxaca, 2011. 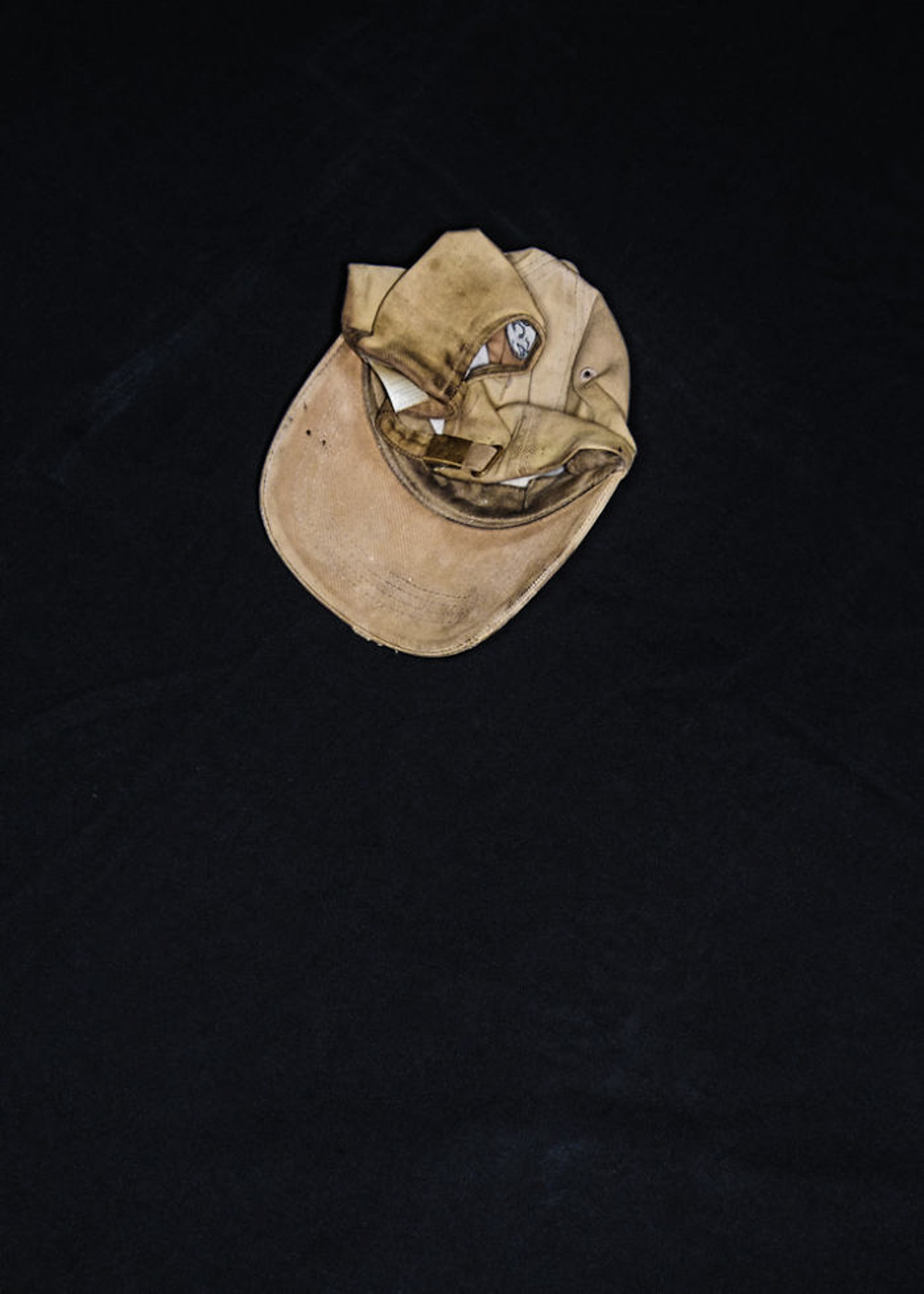 The husband’s hat. The husband of Lydia (Honduras) died two years ago from brain trauma during an impact against the train. It was the only item returned to Lydia when they delivered the body. She is traveling on foot with a caravan of undocumented migrants headed by Father Solalinde from the shelter “Brothers on the way.” D.F., Mexico, 2014

Yenifer, 8, Guatemala. She suffered, along with her 12-year-old sister and 11 other migrants, an automobile accident in Chiapas. The accident was caused by a flat front tire of the truck they boarded. The only person who died was the driver. They wanted to reach the U.S. – Tapachula, Chiapas, 2014. 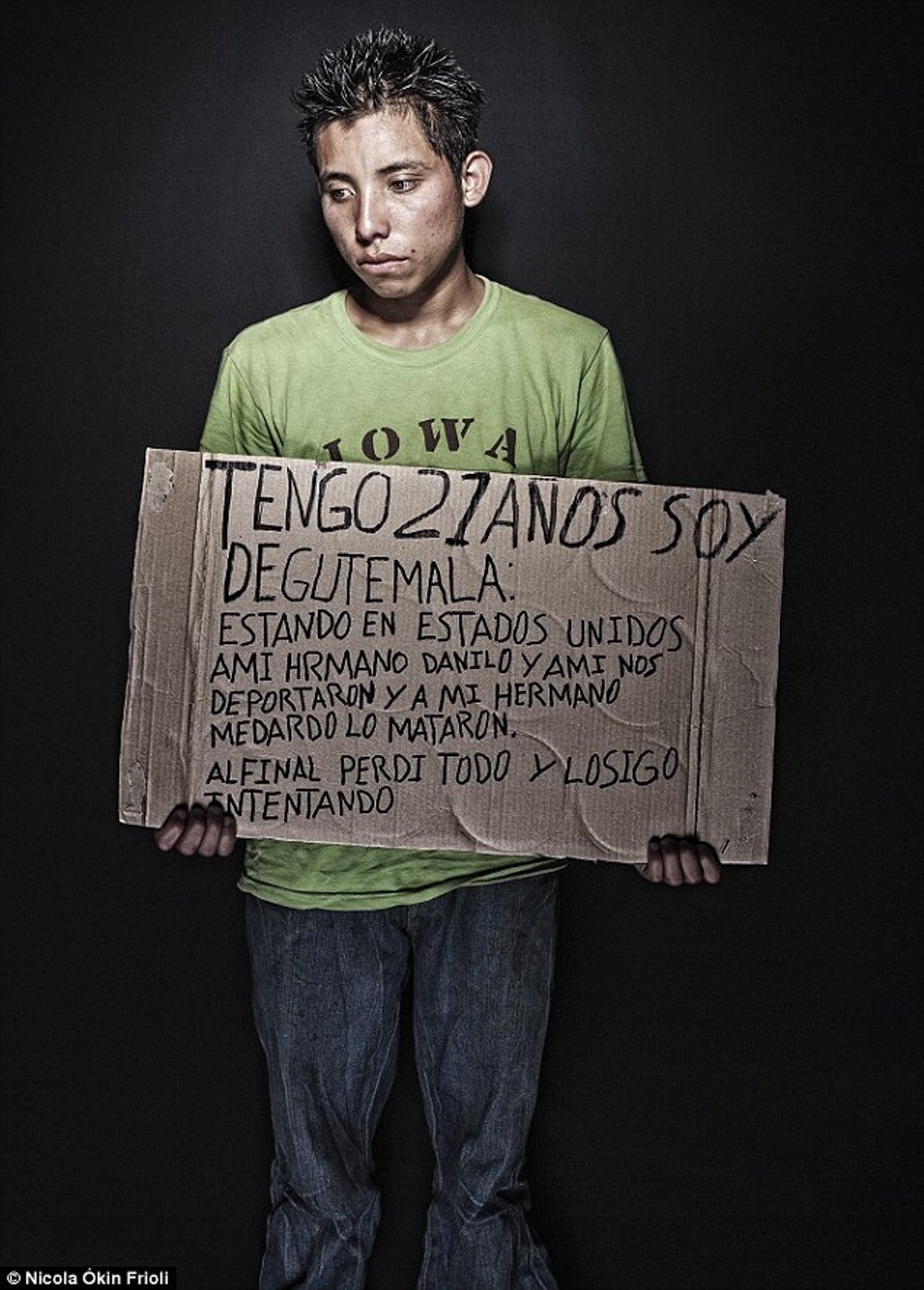 “I’m 21, from Guatemala; while in the U.S. my brother, Danilo, and I were deported, and my brother Medardo was killed. In the end, I lost everything and I keep trying. ” – Ixtepec, Oaxaca, 2011.