Windsor, Missouri is a typical rural American town. Fewer than three thousand people live there. The factory that used to employ about fifteen percent of the adult population closed several years ago, leaving few options for employment. A few buildings along the commercial strip – Uptown, as the locals call it – have collapsed or been destroyed by fire over the past couple decades. The two block section resembles a mouth full of missing teeth, but things are looking up for the quaint town. It’s now at a critical point on an internationally significant bike trail – The Rock Island Trail.

This past December saw the opening of the first section of the new trail. It connects a southern suburb of Kansas City to the Katy Trail forty-seven miles south. The Rock Island Trail meets the 240-mile Katy Trail in the heart of Windsor.

It’s now possible to get nearly all the way from Kansas City to St. Louis by bike or on foot, without ever having to travel alongside cars. Work on another 144 miles is underway, which will create a 400-mile loop around the state and connect to several smaller existing spurs. The trail will also soon complete the route into Kansas City.

It’s big news for a town like Windsor, which has incomes well below the national mean and has struggled to find a strong source of employment. Officials believe the new trail system will bring visitors from all over the world to bike, hike, and camp along the route. 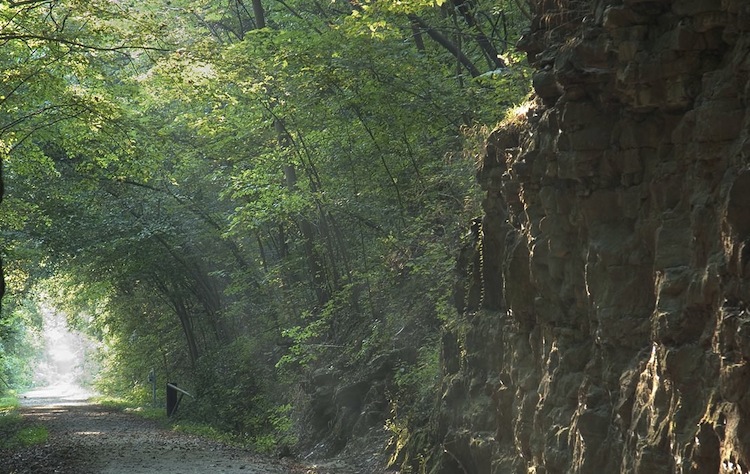 Katy Trail State Park sees up to 300,000 visitors per year, and generates nearly $18.5 million a year in economic impact for the state. For every dollar spent to operate the trail the state receives $18 in economic activity. It has been a great source of revenue for some otherwise struggling local economies, and the addition of the Rock Island section will only increase those benefits.

The Katy Trail was completed in 1996 after fifteen years of incremental additions. It was built along the abandoned Missouri-Kansas-Texas Railroad’s route, the land donated to the state for the purpose of building a multi-use trail. Much of the trail follows the northern bank of the beautiful Missouri River, and leads through small, historic towns. It’s a stunningly scenic area in a part of the country most people wouldn’t consider visiting.

Many of the towns along the route, although small and easy to navigate by foot or bike, are heavily car-dominated. The addition of the trail is exposing healthy values that haven’t historically been apparent. Opportunistic governments and residents of some of the towns have plans of their own to leverage the effects of the trail to expand their transportation options.

In Owensville, kids have not been allowed to walk or bike to school (!!) because there’s too much traffic on the highway separating the residential portion of town from the school. Officials and residents will use the trail to create a Safe Route to School to allow kids to, finally, bike and walk the short distance.

A new senior care centre is being built adjacent to the trail in Eldon so that it can be used for recreation and exercise by their patients. An existing regional health facility will expand near the trail for the same reason. Aside from the economic impact of attracting out of state visitors, the trail will improve the quality of life for residents along the route.

There are multiple efforts to connect to several other existing trails in the region. There are even longer-term plans to create a network from Missouri, through Kansas, Iowa, and Nebraska.

Missouri has never been on the top of anyone’s list of vacation destinations, but this linear park may be about to change that. Despite the area’s “fly-over” status, it really is a unique, pretty area. Experiencing it at the pace of biking or walking is quite rewarding.

Most of these towns were founded as a result of the railroad. They’ve been in a slow, steady economic and cultural decline for decades since use of the rail line was discontinued. While the Rock Island-Katy Trail Loop isn’t going to rival the impact of the railroad, it does provide reason to be more optimistic about the future of this forgotten region.

When you find yourself at the intersection of the Katy and Rock Island trails, just a few blocks from Uptown Windsor, keep a lookout for the horse drawn carts of the Amish and the B-2 Stealth Bomber flying overhead from the nearby Air Force base. It’s not uncommon to see them both at the same time – a symbol of one of the most traditional ways of life and the pinnacle of military technology all in one frame. It will punctuate the experience of walking or cycling along the same path the locomotive once traveled when it was the most important advance in transportation.