Stephan Shay is a runner and Olympic hopeful. Shay has a comparatively invisible ecological footprint than the average American. He is frugal, so he enjoys more financial freedom that many. But to many people, upon seeing Shay lumber down camper steps to some beachfront parking lot in broad daylight, he seems to be just some dude with a slightly patchy beard who is irresponsibly and irrationally living out of a 1966 Cortez.

But Shay doesn’t subscribe to definitions of responsibility that revolve around self-induced burdens like McMansion mortgage payments or shoveling your driveway or tiresomely racing to keep up with the Joneses to prevent slipping back into the imaginary suburban shadow of socio-economic inferiority. To Stephen Shay, what’s truly irresponsible and irrational is squandering life for stuff.

In 2014, after being let go from his job and waving goodbye to his girlfriend who moved halfway across the country, Shay started thinking about life’s impermanence.

Shay is a pro-runner, so most people just dismissed his purchase as another symptom of him running away from his problems.

But to Shay, he wasn’t running from anything. He was running towards something.

So he spent months and $10,000 restoring the vintage bus, which may sound like a lot, but by saving $1,000 a month on rent, his adventure-mobile paid for itself in just 12 months.

Shay was also recently hailed by Climate Resolve as an example of how downsizing exponentially shrinks your carbon footprint. 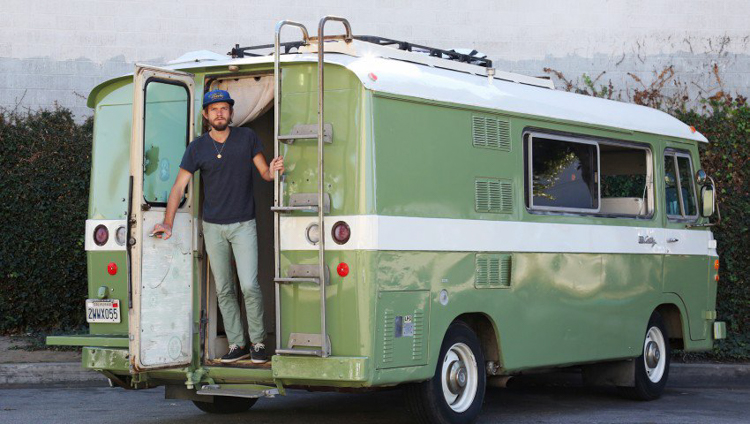 According to Outside, when a Maserati driver ran back two blocks just to tell Shay how jealous he was of his freedom, it kind of confirmed Shay’s theory.

The 29-year-old believes that’s proof people are defined by the spaces they choose to occupy.

Not only does Shay have more time to train for the Olympics, but, he says, “I can splurge and go on trips every weekend, and I’m still able to save money.”