These islands might just disappear forever – but you can help save them.

You’ve seen the notorious click-bait title: “Travel to these islands (and/or places) before they disappear forever.” One quick Google search and hundreds of hits appear.

I’m irked by these “lists” and confused by their purpose. Am I supposed to visit these places simply for my own benefit? So I can tell my grandkid about a mysterious island I visited once that now lies beneath the Pacific Ocean? After which they’ll mumble “cool story, bro” and roll their uncaring, sarcastic little eyes?

The truth is, the places and islands that make it onto those lists are facing an existential threat due to the effects of climate change. That’s why they made the list, because they might actually disappear. Which begs the question, what happens to their inhabitants?

In total, 52 of the world’s tiniest island nations are experiencing problems believed to be a result of climate change, affecting millions of people. Eventually, these people may become the first “environmental” or “climate” refugees. People who are forced to flee their homes primarily due to the “effects of climate change.” Where will they go? Some governments, like the Maldives – a nation that Evan Puschak from the Seeker Network believes will be the “first state in history to be completely erased by the sea” – are planning to relocate, once adaptation is no longer feasible. Imagine that, an entire country relocating to another country or region. Ronald Jumeau, the Seychelles ambassador to the United States, anxiously stated in a 2010 interview, “There hasn’t been a government of refugees before. So it’s raising so much complex country questions about international law.” Questions no one knows how to answer.

To offer additional perspective, here is a more realistic list of “disappearing islands.” Complete with an estimated countdown until relocation doomsday, and furthermore, what you can do to help them. 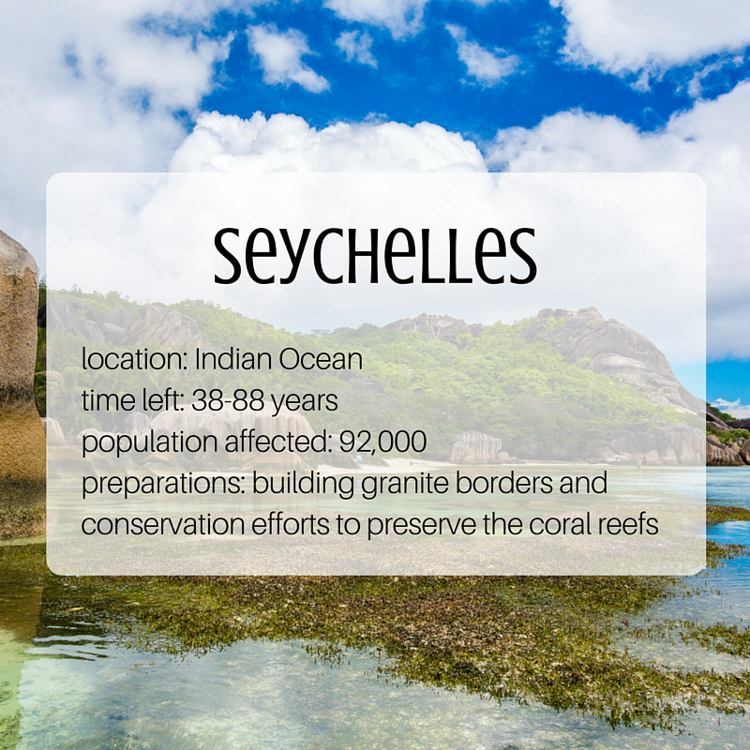 Maybe the better question is what can you do? Odds are, you probably don’t live on one of these islands – unless you’re in Manhattan right now, in which case you should be a little panicked. Yes, you should visit these places if you can, because most of them rely on tourism. However, you should keep their fragility in mind and do your part to help them.

Here are four things you can do:

• Curb the negative effects from climate change by changing your lifestyle. We’ve already published an article that shows you exactly how to do this, even without leaving your house.

• Promote the interests of the poorer island nations that are struggling to convince the international world that they matter. It’s going to cost a lot of money in order for these islands to adapt – money they don’t have and money most nations are not willing to give. Seychelles’ ambassador Jumeau encourages Americans, particularly those living in islands on the northeastern coast dealing with similar issues, to engage with their local government. According to Jumeau, by Americans asking their politicians “What are you doing to save my island?” they inevitably “save the islands of the world.” Well, it is an election year…

• Become an engineer. Paul Kench, a coastal geomorphologist, recently told National Geographic, “For densely urban centers, the only strategies to cope with rising sea levels will be engineered ones.” Venice is a case and point. The government has invested billions of Euros on MOSE, its flood barrier project, in order to engineer their way out of annihilation. Unfortunately, most island nations cannot afford to equip every island with the necessary infrastructure to keep out the rising seas forever, but that doesn’t mean they won’t try to save some of them.

• Educate people. In a 2015 research study conducted by Nature Climate Change, more than 75 per cent of Australians, North Americans and Europeans understood that climate change was real, however on average, less than 50 per cent viewed it as a danger to their livelihood. In contrast, 90 per cent of people living in countries in South America, as well as India, Tanzania and Morocco, were worried about the negative effects of climate change. There’s an obvious gap between developed and developing countries in regards to experiencing the immediate effects, and unsurprisingly, it is the developed countries that continue to drag their feet on adhering to the most recent climate deal. American Presidential hopeful, Donald Trump has already said he’ll “end the Paris Climate Agreement” reached just this past year. Like I said, it’s an election year.

Christopher Lespoir, a writer with a local Seychelles’ newspaper lamented in 2010, “Not long ago, Seychelles was one of the small island states who went on screaming at the Copenhagen conference, pleading for the rich men’s club to hear our call that our survival depends greatly on their commitment to save our planet. I feel it was sad and disappointing to see that the market, profit and the economy won over life.”