If you want to live in Miyakejima, Japan you must carry a gas mask at all times (Photos)

Home » If you want to live in Miyakejima, Japan you must carry a gas mask at all times (Photos)

About 160 kilometres south of Tokyo is the town of Miyakejima, sitting at the base of the volcano that shares its name. This town is covered with a cloud of harmful sulphur dioxide gas, spewed into the air by volcanic eruptions. The area’s heavy weather systems and cold make it worse. Dealing with the sulphur dioxide constantly pumped into the air is one of the consequences for those living in Miyakejima.

To live there, you must carry a gas mask at all times. If the air quality gets bad enough, the town turns into a masked extra-terrestrial looking crowd of people seemingly all attending the same themed costume party.

Those who have studied the volcano’s patterns have found that it goes off in intervals of 20 years. At one point, it was so bad that it was polluting the air with 42,000 tons of sulphur dioxide per day. The year 2000 was a particularly awful year on the island—so bad that it was shut down and inhabitants had to be evacuated. Many of them returned in 2005 though and as of January 1st 2012, the population of the island sat at 2,775.

While many wouldn’t exactly call this an ideal spot for tourists, some curious about this town where the citizens wear gas masks do venture through. The city’s site advises them to learn about the harmful effects of sulfur dioxide before visiting as it can be quite damaging to one’s health. They even suggest tourists go so far as to get a respiratory medical exam before booking the trip. And yes, they too, must arrive with a mask.

In terms of monitoring the air quality, the Tokyo Metropolitan Government has been watching the volcanic activity through videos, helicopter and satellite images. In the meantime, civilians walk around, gas masks at the ready.

This town is immersed in a cloud of sulfur dioxide gas, spewed into the air by volcanic eruptions 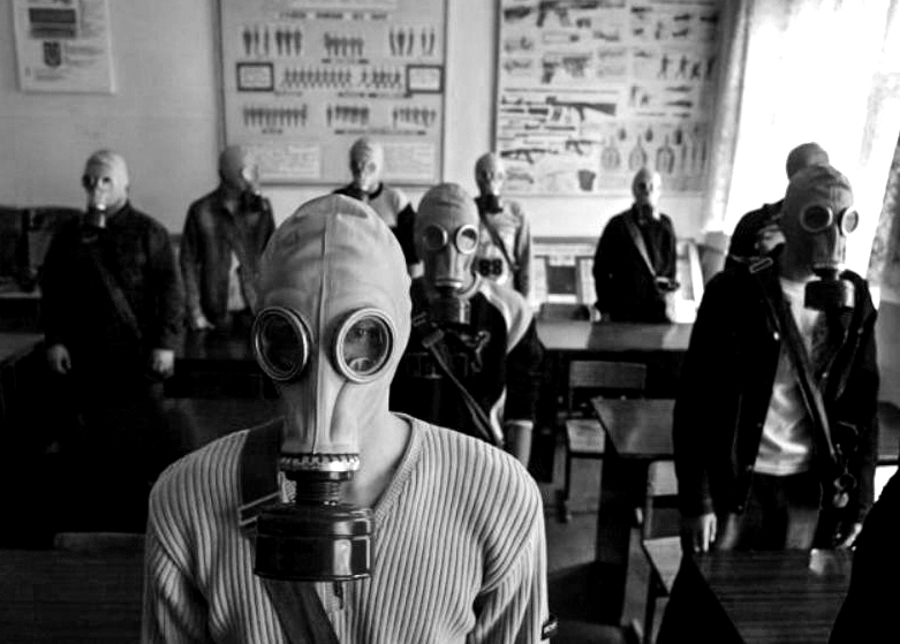