Hidden 30 metres below ground behind a secret door for over a decade, the Temples of Humankind are as beautiful as they are shrouded in mystery. 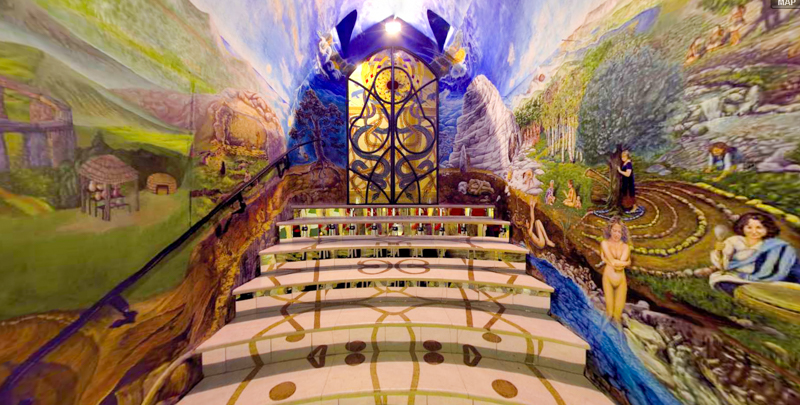 Stretching hundreds of metres across, the eight connected rooms take up almost 8,500 cubic metres – almost twice the size of the Elizabeth Tower that houses Big Ben in London.

Created by the Federation of Damanhur, a spiritual community and eco-village located in northern Italy, the temples are a testimony to the wondrous creativity and spirituality of humans. 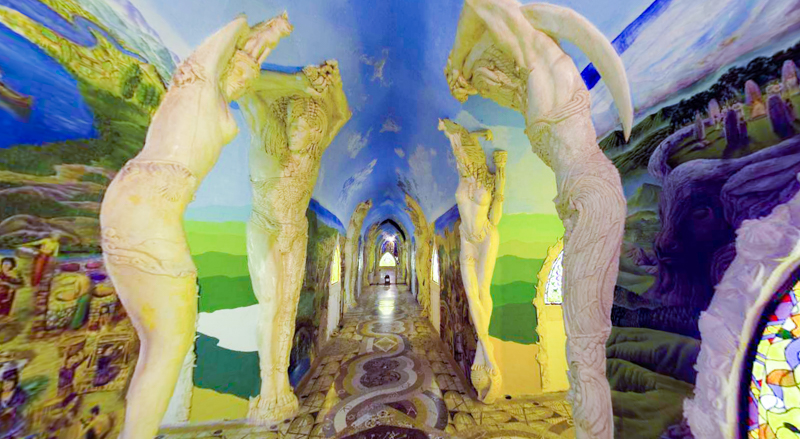 It all began with Damanhur’s founder, Oberto Airaudi, who was born in 1950. Airaudi, who prefers to go by the name Falco, claims he’s had quite the childhood. On top of the ability to heal physical pain of friends and family, he claims to have received blueprints for the Temples of Humankind from an alien spaceship on the Monti Pelati hills of Italy.

Damanhur’s founder, Oberto Airaudi, who goes by Falco, claims to have received blueprints for the Temples of Humankind from an alien spaceship on the Monti Pelati hills of Italy. 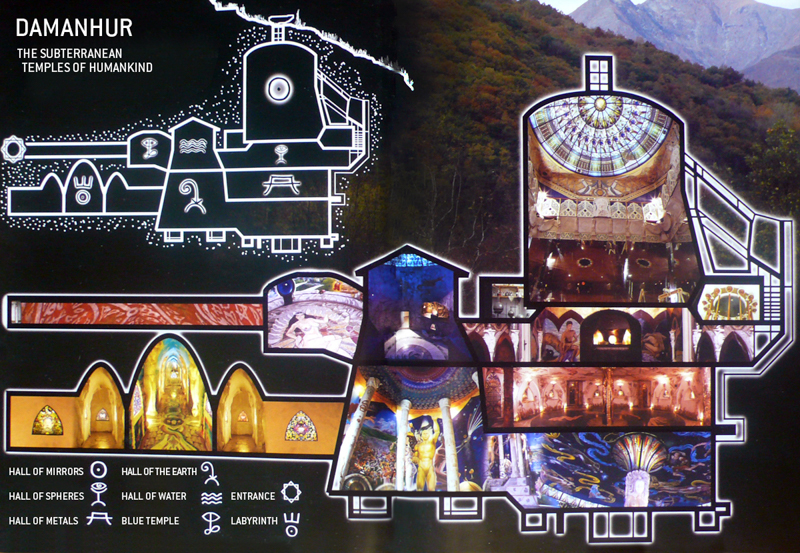 When he was older, Falco entered the work force as an insurance broker with limited success, however it was his penchant for the supernatural that would lead him to his next career, the “study of bioradiant energy and paranormal phenomenon.”

By 1975, Falco was a spiritual healer, medium and parapsychologist working with some like-minded friends out of the Horus Center for Parapsychological and Esoteric Research in Turin, Italy, which he founded. It was also at this time that he began the Federation of Damanhur, beginning the search for his perfect site to build the temples from his childhood visions. The plan was for the temples to be a “gift to humanity” once they were complete.

In 1977, he found the site; a remote hillside located in the Piedmont region of northern Italy, where he felt the rock was hard enough to sustain the temples foundations.

The plan was for the temples to be a “gift to humanity” once they were complete. 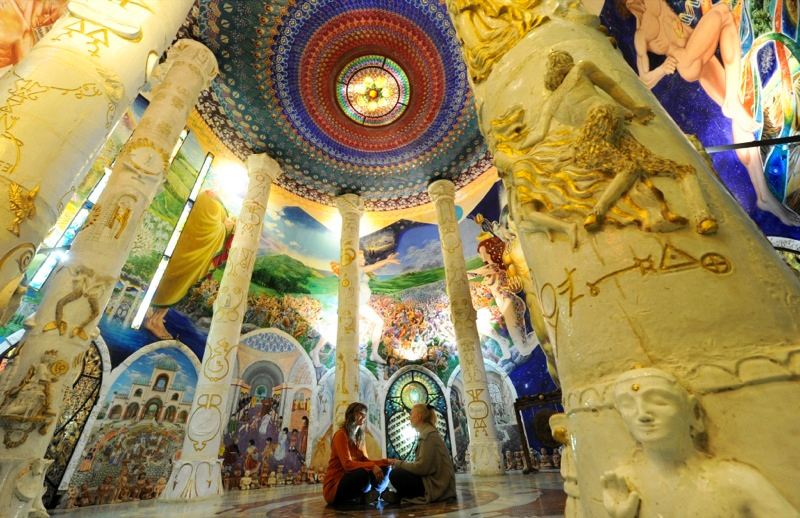 Falco had a house built on the hillside for himself and the growing number of members who had joined Damanhur, named after the Egyptian city. Excavating by hammer and pick, Falco had his members begin hollowing out the mountain in August 1978 under the guise of the construction of a cellar. Aside from a ceremonial tap into the rock from time to time, Falco did essentially no digging himself. To hide the sound of the dig, Damanhurians would often pretend to throw parties. It took over a decade to complete, but in 1991, with the temples all but finished, the village had another problem – the cops.

After already coming the year before to investigate alleged tax invasion, Italian authorities returned to Damanhur in 1992 on a tip that there was a series of temples hidden within the mountains. State prosecutor Bruno Tinti memorably proclaimed, “Show us these temples or we will dynamite the entire hillside.” At this point, Falco obeyed the authorities’ orders and led them to the secret door used as an entrance to the first temple – the Hall of the Earth. The policemen were initially hesitant, but upon entering the temple, they were astonished.

In 1991, with the temples all but finished, the village had another problem – the cops. The prosecutor proclaimed, “Show us these temples or we will dynamite the entire hillside.” Falco obeyed the authorities and they were astonished. 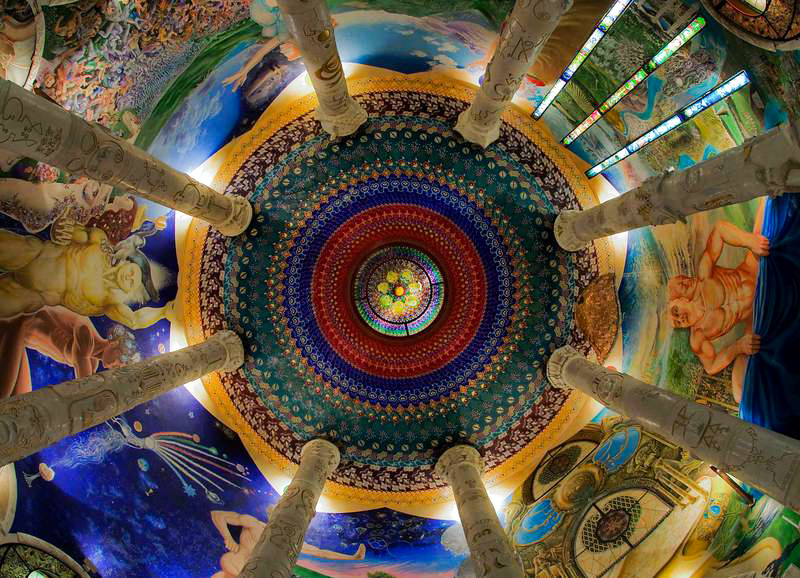 As Falco led the authorities throughout the connected rooms, they repeated their initial reaction with each new room they came into. Some had ceilings over seven metres tall, while others were covered in mirrors or walls of gold. Upon exiting the temples, Tinti put his hand on Falco’s shoulder, “We must do something to save the temples.” Under Italian law, it is illegal to build underground without planning or permission. 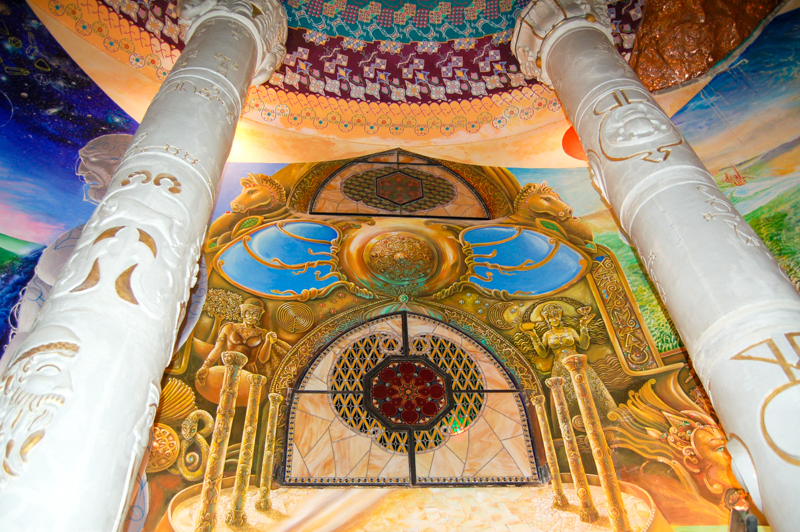 Almost immediately after the temples’ existence was made public, the Catholic Church demanded they be destroyed. However, through a number of legal battles and international support garnered for the temples, mainly through widespread media attention, the Italian government ended up changing the laws to allow Damanhur to continue construction of the temples, after paying somewhere between $100 and $150 million lira (or $120,000 Canadian) in retroactive building taxes.

The Italian government ended up changing the laws to allow Damanhur to continue construction of the temples.

We’re lucky that the Italian government decided to keep the temples intact, because they’re some seriously beautiful feats of architecture. Damanhurians say that the Temples of Humankind are meant to represent a profound journey inside oneself. If so, our insides must be seriously trippy.