When Lou Risdale implemented her communal front-yard garden, it took nearly a month to attract the interest of her neighbours. At the family level, the dinner table best stands to tighten the roots of our social lives. Yet before this food is prepared or even stored, at the level of cultivation and harvest, these practices best serve the larger family—the one built from proximity that, with care, has the potential to become community.

Like Risdale’s budding front-yard garden, a community starts out slow, and Risdale anticipated this. To offer anything for free is to awaken the natural suspicions of a society primed to reject that which seeks no profit. Risdale offered the fruits of her garden to anyone willing, rendered by the “#Food is Free” sign that oversaw her produce laid out in the yard. And when she had no takers, she replaced the sign with one that offered a deeper specification as to why, and more importantly what, “free” actually meant in this case. After all, skepticism is the natural way to approach free organic and healthy food with no-strings-attached. But after a month, the neighbours lowered their guard and this is when community began to take place.

Risdale’s free garden is based primarily around the Food is Free movement, and as she mentions in a profile by Happen Films, the movement was started by some guy in America, named John.

John VanDeusen Edwards is in fact at the helm of the Food is Free project, originating from Austin, Texas in 2012, and rapidly expanding across the globe. Edwards is looking to expand the initiative, which is foremost an ideology of communal produce-gardening. Edwards and his team train people in the art of effective gardening, and teach them how to erect a functioning communal farm and what is needed to sustain it. With help from volunteers, the non-profit uses reclaimed wood to construct planters, which are then offered free to schools or other communities that could benefit. So far, approximately 190 cities across the world have gotten involved with the project to undertake their own version of the Food is Free project, and promote the growth of front yard gardens. 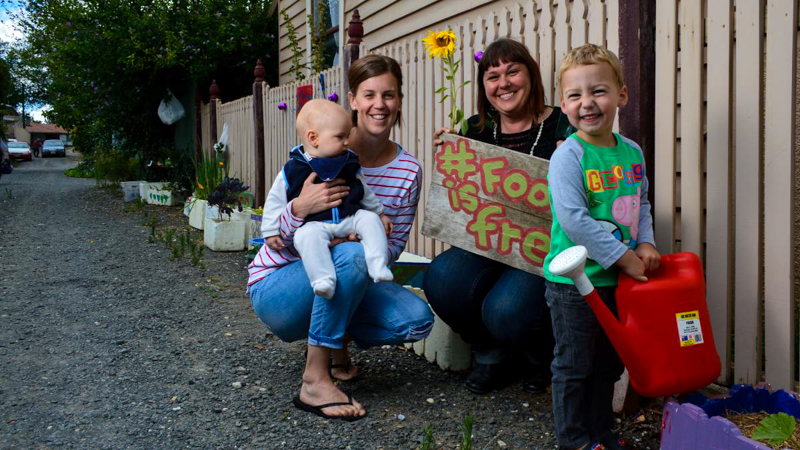 “Everyone has a week where you can’t make rent, or afford the school fees or whatever else is going on in your life financially. So it’s really nice to know you’ve got somewhere around the corner that really cares.” Says Risdale to Happen, whose garden started simply because she had grown an excess of produce, and thus left any extra food out front of her house with a “#Food is Free” sign. And though it took about a month to catch on, Risdale now claims that there is “anywhere up to 100 people a day” stopping by her yard to look over the produce, either to take or leave. “It breaks a lot of taboos,” says Risdale to goodfood.com “We don’t own the land it’s on, for instance. The community has just taken it over. I’m a great believer in green anarchy.” This is what lends Risdale’s project its guerrilla framework, making it both viable and attractive for so many across the globe.

“The concept that something is free blows peoples’ minds,” says Risdale to Happen. And yet the rewards far outreach the giving or receiving of food, as Risdale has seen from her own experience with the free-food laneway she started at the corner of Ripon St Sth and Warrior Place, Ballarat, Australia. The laneway has reinvigorated the sense of community.