The saying “the grass is always greener on the other side” was created to describe the inherently curious nature of humans. It has been related to envy and jealousy, but also the need to accomplish more, to better ourselves or to strive higher, albeit in a rather loose sense. In the case of Morocco, you could liken the “grass” to its arid, heat-blasted deserts, and the “other side” to a gigantic solar energy plant that’s going to power about a million homes.

Morocco is currently building a massive solar mega-plant in the city of Ouarzazate, located on the edge of the Sahara desert.

The project is expected to have four linked power plants, and will provide power to almost half of the renewable energy in Morocco. The first phase, named Noor 1 is scheduled to be completed by the end of 2015.

When completed in 2020, the sunlight-absorbing behemoth is going to be the largest concentrated solar power (CSP) plant in the world.

The head of Morocco’s solar energy agency MASEN Mustapha Bakkoury said that progress towards the completion of the project was “satisfactory.”

“[The project] reinforces the will… to optimise the exploitation of Morocco’s natural resources, to preserve its environment… and sustain its development,” Bakkoury said in a ceremony attended by Morocco’s King Mohammed VI according to Phys.org.

Morocco is a country with scarce oil and gas resources and is used to importing most of its energy from foreign sources, incurring large costs. They decided to make use of what they have at their sun-baked landscape which is rich with—solar rays.

Morocco’s environment minister, Hakima el-Haite, said that Morocco imports 94% of their energy in fossil fuel form from abroad. “We also used to subsidize fossil fuels which have a heavy cost, so when we heard about the potential of solar energy, we thought; why not?” Hakima said to the Guardian.

Noor 2 and Noor 3, which are slated for completion in 2017 has technicians stating that the plants have the capability of holding energy for up to 8 hours, enabling the possibility of 24/7 solar energy production. After the completion of the project, Morocco aims to start exporting their energy to Europe.

Similar projects are starting to pop up all over the world with plans to build a 100 MW power plant in Redstone, South Africa as well as a 210 MW solar hybrid project being planned for the Chilean desert.

“We are very proud of this project,” el-Haite is quoted as saying. “I think it is the most important solar plant in the world.” 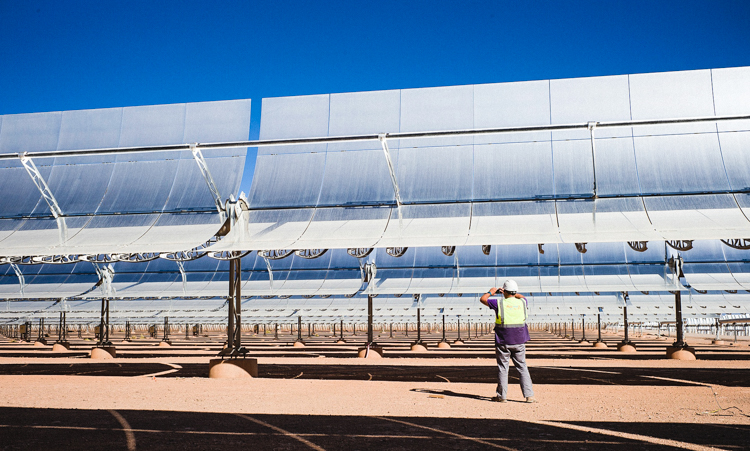