Dear Boris – Have settled on this beautiful island for the summer. Wish you could spend your holiday with me. So glad you got the dictionaries. Will write you a letter soon. Please drop me a line. Always – Truman C.

DEAR D², I AM NOW A LICENSED CA DRIVER, WHICH FROM THE SENSE I GET IS OFFICIAL STATE-CITIZENSHIP IF ANYTHING HERE IS. THERE IS A PALM TREE IN MY BACK YARD THAT’S 11 1/2 FEET AROUND. A BRICK SHITHOUSE OF A PALM TREE. ¶ THANK YOU FOR YOUR NOTE. I HAVE NOT YET READ THE GADDIS, BUT I’M IN CONTACT WITH FRANZEN, WHO’S APPARENTLY BEEN CHARGED THE TASK OF A COMPREHENSIVE GADDIS PIECE BY THE NYer, AND IS ‘STRUGGLING’ WITH IT. ¶ THIS BLOODY MENGENLEHRE BOOK (IT INTIMIDATES ME THAT YOU KNOW THIS TERM) TURNS OUT NOT TO BE DONE — BOTH THE MATH-EDITOR AND THE GENERAL EDITOR WANT REPAIRS — OFTEN THEIR DEMANDS ARE MUTUALLY CONTRADICTORY. I WILL END UP HAVING SPENT 11 MONTHS FULL-TIME ON A PROJECT I’D PLANNED TO KNOCK OFF PART-TIME IN 4. I NEVER WANT TO SEE ANOTHER FOURIER SERIES AS LONG AS I LIVE. ¶ I’D LOVE A CHANCE TO EYEBALL YR. NEW NOVEL IF YOU DON’T OBJECT. AND I HOPE VALPARAISO IS IN GOOD HANDS WITH THE TROUPE. 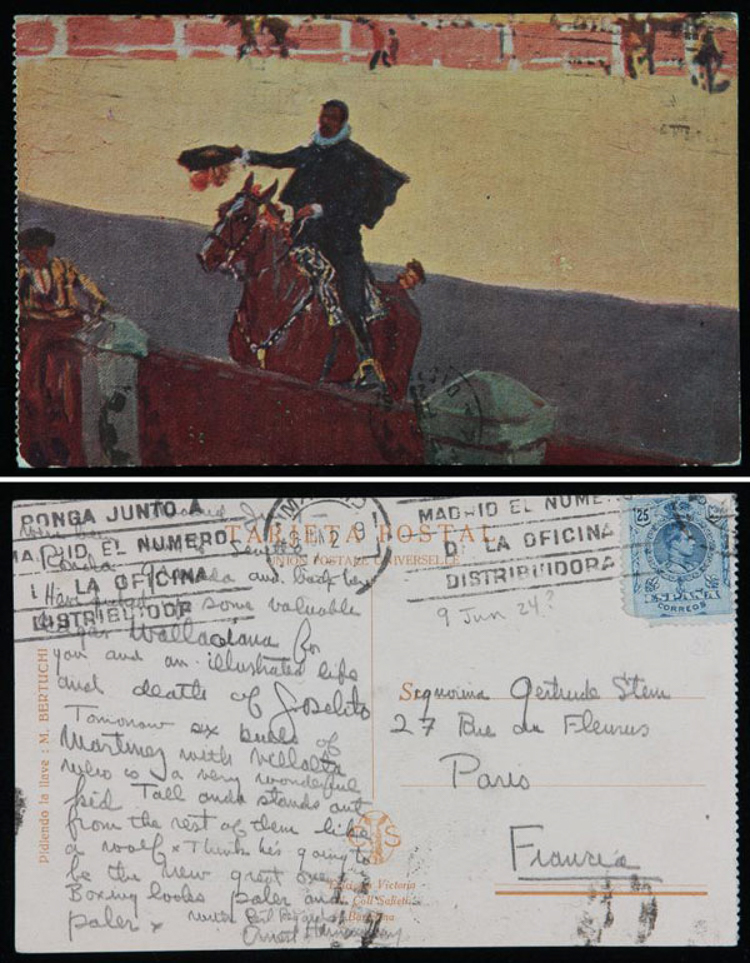 Tomorrow six bulls of Martinez with Villalta, who is a very wonderful kid. Tall and stands out from the rest of them like a wolf. Think he’s going to be the new great one.

The rest of the postcard is difficult to make out. According to Open Culture, Hemingway travelled to Spain to attend bullfights in the summer of 1924, and his knowledge of Spain and bullfighting would go on to be a big part of his 1926 novel, The Sun Also Rises.

Scott Fitzgerald to himself (1930s)

Dear Malcolm, You’ve all delayed once more, not sending my work for the summer on the mountain—I’ve started an epic novel of 1000 pages THE BEAT GENERATION—If you don’t send me a contract with an advance (or some kind of option) by October first, on ON THE ROAD, I am going to withdraw the manuscript from Viking and sell it elsewhere. Than have it demeaned I’d rather it were never published. Period. Jack Kerouac.

According to Open Culture, this postcard was a response to a letter Cowley had written to Kerouac just a few months before, which read:

Automatic writing is fine for a start but it has to be revised and put into shape or people will quite properly refuse to read it–and what you need now is to be read, not to be exhibited as a sort of natural phenomenon like [the] Old Faithful geyser that sends up a jet of steam and mud every hour on the hour.

DEAR DAVID: A FRIEND GAVE ME A HANDBOOK OF THE NAZI PARTY. I LOOKED UP VONNEGUT AND FOUND ONE. HE WAS BOSS OR WHATEVER OF DOCTORS IN MUNSTER. AS FOR GRASS: LIKE SO MANY OF US, HE LOVES ATTENTION. I KNOW HIM, AND AS A JOKE I’VE SAID “NOW HE’S GOING TO BLOW MY COVER, BECAUSE WE WERE IN THE SS TOGETHER.” IF I HAD BEEN BORN IN GERMANY, I MIGHT HAVE JOINED THE COMBAT SS, BUT NOT, I HOPE, THE DEATH CAMP SOCIOPATHS.

A P.S. TO MY FIRST CARD: MAYBE TEN YEARS AGO HEINRICH BOLL AND I DID A CONVERSATION FOR BBC TV ABOUT BEING GERMAN. I ASKED HIM WHAT THE BASIC FLAW WAS IN THE GERMAN CHARACTER, AND HE SAID “OBEDIENCE.” CHEERS.